“A Five-Minute Operation that can change a life”

On Monday, November 4, Walk for Life West Coast co-founder Dolores Meehan was invited to debate Professor Malcolm Potts, the course advisor for UC Public Health’s Social, Political, and Ethical Issues in Health and Medicine seminar at Berkeley’s Wheeler Auditorium. Debate organizers told Ms. Meehan that the debate, on Human Reproduction is the seminar’s most popular annual event, and that seemed accurate. Wheeler Auditorium was packed, with a number of students sitting on the floor against the back walls of the auditorium.

I arrived late, and missed Professor Potts’ initial presentation, so Ms. Meehan was in her initial presentation. She was showing the students a video called “Your Developing Baby,” which accompanies a book of the same name by two radiologists from Harvard University Medical School. The video features  a series of still or moving ultrasounds from each week of a pregnancy. As the video finished, Meehan concluded “At the moment of conception you are a mother. It’s only when the mother decides she does not want to have the baby that the mental gymnastics begin.”

The use of video and imagery, including that of the victims of abortions, proved to be a large part of Meehan’s presentation. She told the audience: “I’m tired of talking about this philosophically. I told myself that I would not step on a stage again unless I could talk about the reality of abortion.”

Following the “Your Developing Baby” video, Meehan announced that she would be doing a powerpoint presentation with pictures of the victims of abortion. She counseled the students that they might find this disturbing, and gave an opportunity for any who wished to leave to do so. Meehan then showed images first of severed body parts (tiny human feet); a baby that had been killed through a saline abortion; a baby which had been cut into pieces through a partial birth abortion; and finally a very late stage victim of a partial-birth abortion. This last child, identifiably African American, had not been dismembered, and because his face was towards the camera, the fatal wound at the back of the head was barely visible. 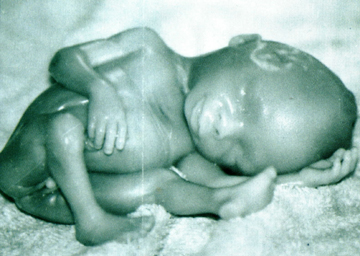 With this image filling the back wall of the auditorium, Meehan—herself a registered nurse– began to read the testimony of Brenda Pratt Shafer, an RN from the state of Ohio, given to the United States Congress on March 21, 1996. Shafer began “Mr. Chairman and honorable members of the Judiciary Committee, I am Brenda Pratt Shafer. I am here before you, at the request of the Committee, to relate to you my experience as an eyewitness to what is now known as the partial-birth abortion procedure.”  She went on: “…Dr. Haskell asked me to observe as he performed several of the procedures that are the subject of this hearing. Although I was in that clinic on assignment of the agency, Dr. Haskell was interested in hiring me full time, and I was being given orientation in the entire range of procedures provided at that facility….

“I was present for three of these partial-birth procedures. It is the first one that I will describe to you in detail….The baby’s little fingers were clasping and unclasping, and his feet were kicking. Then the doctor stuck the scissors through the back of his head, and the baby’s arms jerked out in a flinch, a startle reaction, like a baby does when he thinks that he might fall. The doctor opened up the scissors, stuck a high-powered suction tube into the opening and sucked the baby’s brains out.  Now the baby was completely limp…“

It was difficult to gauge the response of the students to this gruesome testimony—they may have steeled themselves by Meehan’s warning—but Meehan followed this a little later with a surprise observation that definitely drew a response. She discussed the situation of a young woman who had found herself pregnant, and had shared this with the child’s father. She said that the most common male response now seems to be “I’ll support you in whatever you want to do,” and then quietly but very forcefully added “When a woman hears that, she is crushed.” That observation, and the situation described, seemed to send a jolt of electricity through the audience that even the images of aborted children had not. It was obviously something that struck quite close to home with these young college students, a pretty equal mix of men and women.

Professor Potts then returned to the stage. He offered some “hard cases” (Downs Syndrome, rape, poverty) which in his opinion clearly justify abortion.  He also said that “Nothing I can do as a doctor changes a life so much as a 5-minute operation”– by which he meant an abortion.

That statement proved to be one thing that Potts and Meehan would agree on.  Due to a technical malfunction, Meehan had been unable to show her final video: the testimony of Vera Faith Lord at the 2007 Walk for Life West Coast. When the glitch was finally fixed and the students heard Ms. Lord’s testimony, they had chance to ponder the real significance of Potts’ words: “Nothing I can do as a doctor changes a life so much as a 5-minute operation.”

Ms. Lord said “Our sisterhood is not a happy one…There is one awful moment when we truly know what we have done.  No matter what politically correct nickname that we have given abortion, in that few seconds we know we have committed the most unnatural of acts: we have killed our own offspring…We all reluctantly chose abortion for a thousand reasons so that our lives would not have to change, and here’s the great irony: from the second our baby died our lives in a thousand ways have never ever been the same.” Ms. Lord’s speech can be seen below.