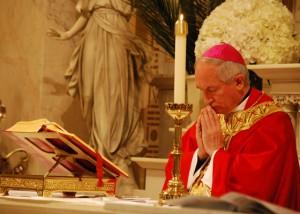 Archbishop Silvano Tomasi, Pope Francis’ ambassador to the United Nations reminded U.N officials, who pretend to be against torture, that abortion IS torture.

New York, NY (CFAM) — The Vatican had strong words for U.N. experts who accused the Catholic Church of torture because of its teaching on abortion.

“The Holy See condemns the torture of anyone, including those tortured and killed before they are born,” said Archbishop Silvano Tomasi, Apostolic Nuncio at the United Nations in Geneva.

For the second time this year, a Vatican delegation was in Geneva to discuss the obligations of the Holy See under international law with U.N. experts, and for the second time Catholic doctrine on abortion was at issue, drawing media attention and criticism for the mostly obscure U.N. committees.

Tomasi was reporting on the Vatican’s implementation with the U.N. treaty against torture, which it ratified in 2002. Experts on the U.N. committee against torture suggested the Church’s teaching on the inviolable dignity of human life is a form of torture.

He accused Canada and the United Kingdom of being guilty of torture by allowing late-term abortions where children are left to die without any medical care after they are born alive.

Good work, Excellency. May your words awaken the consciences of those charged with upholding the common good!