Today’s California Catholic Daily included an interview with Monica Snyder, of Secular Pro Life. Ms. Snyder will be one of our speakers at the Walk for Life West Coast on January 25.

Secular Pro-Lifer to Speak at Walk for Life West Coast 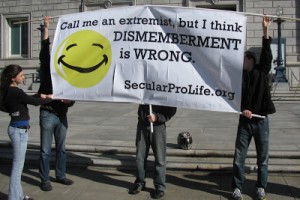 On January 25, 2014, pro-lifers will assemble in San Francisco for the 10th annual Walk for Life West Coast. As the walk has grown it has attracted a diverse group of supporters. The radical nature of the abortion issue is capable of uniting those diverse groups. One such group is Secular Pro-Life.   Like many religious groups, Secular Pro-Life brings rigorous scientific analysis (a recent post was entitled “Don’t impose your science on me!”) to the question, but unlike religious groups they can’t be automatically disregarded by those claiming to see an inherent opposition between religion and science.

On January 29, 2013, Monica Lynn Snyder of Secular Pro-Life posted about her experience at the Walk for Life West Coast:

“This is my 6th Walk for Life West Coast. The first time I attended was only the 2nd year they had the walk. The organizers of the walk explained they wanted to demonstrate that even in one of the most left-wing areas of the country there is a strong pro-life presence. It’s a brilliant idea….While setting our banner up, a man from the rally crossed the street to tell us that we are very welcome to join the rally, regardless of belief system. It was incredibly sweet.”