One of the nicest things at the Walk for Life West Coast is the participation of our wonderful young people! This year we had a group all the way from the Diocese of Tulsa, Oklahoma. Here’s a very comprehensive article by Alex Merrifield, about the Walk, that appeared in 4E Voices, the online publication of the Bartlesville Oklahoma public schools. The photo is of a flyer from the Diocese of Tulsa. 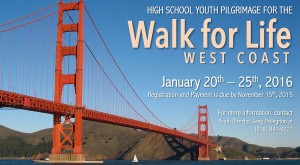 Flyer for Catholic Youth from St. John’s Church in Bartlesville, Diocese of Tulsa

The Bartlesville Catholic youth left town around 9 p.m. to travel to San Francisco Jan. 20, joining many others from the Catholic diocese of Tulsa and Oklahoma City. After 30 long hours, the group arrived in the bay area around 6 a.m. on Friday.

The students went to San Francisco for the West Coast Walk for Life, an event held in downtown San Francisco every year since 2004, around the time of the famous 1973 Supreme Court case that legalized abortion; Roe vs Wade. The intent of the West Coast Walk for Life is to walk and pray for the end to abortion, the reversal of Roe vs Wade, to end federal funding of Planned Parenthood and other abortion providers, and other unnatural deaths such as assisted suicide and capital punishment.

In past years, the church youth group has gone to Washington D.C. for the March for Life DC, but this year decided to head west for the Walk for Life West Coast, which was somewhat of a smaller event compared to the 600,000 who marched in D.C. The local mainstream media projected around 55,000 people there, but some projections put the actual amount between 75,000 to 100,000 people.

The morning of the march, the group attended the Mass for Life at 9:30 a.m.; the mass was celebrated at St. Mary’s Cathedral by the archbishop of the San Francisco diocese, Archbishop Salvatore Cordileone. In his homily, Cordileone spoke of the sanctity of life from conception to death, speaking of what is right in God’s eyes compared to the law of the country, state or city.

“…there are those who would defend the practice by deflecting the argument to questions of legal technicalities regarding what is and is not against the law, thus side-stepping the real question, the much bigger question. But the big question cannot be ignored, it has to be answered, there is no getting around it: what does this say about us as a society?”Cordileone said.

After the mass was over, the group walked back to the civic center plaza, which is where the annual pre-march rally was held. This year’s speakers included several influential prolife activists from the United States and several from all around the world, including Mexican prolife activist and singer Emmanuel and Obianauju Ekeocha of Culture of Life Africa.

Another notable speaker was David Daleiden of the Center for Medical Progress, the man behind the recent string of videos showing Planned Parenthood officials discussing the selling and buying of aborted baby parts and fetal tissue. Daleiden spoke with confidence and passion, talking about the lessons he has learned and the identity of a baby in the womb.

“The videos raise the biggest question that Planned Parenthood and their allies cannot answer. That is how on the one hand in our country the humanity of the baby fetus is not considered to be equal enough to our own in order to be totally protected by law, but at the same time it is precisely their equal and identical humanity to our own that makes them so valuable for sale,” Daleiden said.

Following the rally, the mile and a half walk began down Market Street, led by many priests, deacons, nuns and other church leadership. There were also thousands and thousands of youth of the next generation from San Francisco, other places in California, Arizona, Nevada, and of course, Oklahoma. Throughout the walk, the group faced many counter-protesters, many of them shouting vulgar terms and giving vulgar hand gestures.

“The counter-protesters were cool and all, but I got sad because they had so much hate, and God is not about hate,” sophomore Nathan Lauritsen said.

The West Coast Walk differed from Washington D.C. in the way that there were more counter-protesters and people with opposing viewpoints.

“There were a lot more pro-choice people there than Washington D.C.,” sophomore Paige Sauer said. “Seeing the way they acted really helped confirm my views.”

“The March itself was so much louder and more intense than the DC March,” Catholic youth director Greg Pellegrino said. “The counter-protesters also made it very interesting because we got to see people that don’t think the way we do.”

After the end of the walk, the youth went to Chinatown and Little Italy the rest of the night, touring the interesting places of San Francisco. The following day, they visited the Mission Dolores, a Spanish mission built in 1776. They also visited the National Shrine of St. Francis of Assisi and attended mass there. That same Sunday, Jan. 24, they started the bus ride back, eventually getting back into town late Monday night, Jan. 25.