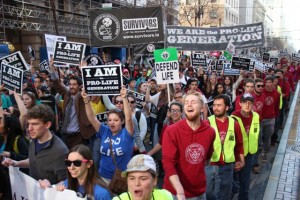 osary in English and Spanish, the Salve Regina, and joyful mariachi music at the 11th Annual Walk for Life West Coast.  The 11th Annual Walk appeared to be the largest yet. Witnesses at Justin Herman Plaza, the Walk’s end point, told press that attendees streamed steadily by for a full hour.

The day began at 9:30 AM at St. Mary’s Cathedral, where Archbishop Salvatore Cordileone, joined by 11 brother bishops, celebrated the Walk for Life Mass. The Cathedral was over-packed, with nearly 5,000 people—standing room only. Cordileone told the worshippers “Our goal is not simply to make abortion illegal but to build a culture of life.” His Excellency commented on the proportion of youth in attendance and told them:  “My young people, YOU ARE the prolife generation!”

Tens of thousands of pro-lifers overflowed the city’s Civic Center Plaza as the pre-Walk Rally took place. The invocation was given by Archbishop Carlo Maria Viganò, Apostolic Nuncio to the United States.  The Archbishop also shared a message of thanks and support from Pope Francis to:  “…all who came out to the Walk for Life West Coast and all who supported it through their sacrifices and prayers.” The Holy Father called the inviolability of the right-to-life the “essential condition” for the building of a just society. The audience responded with cries of “Viva Papa!”

Speakers included Julia Holcomb Rebekah Buell, a young woman who attempted to abort her second child with the abortion pill RU486. This was an act of desperation, but Ms. Buell had a change of heart and mind, and she used the newly available ‘Abortion Pill Reversal’ technique, which saved the baby. She concluded her talk by saying “With medical advancements like this we are closer to ending this war on the unborn!” She then surprised and delighted the crowd by introducing “her greatest joy….my son Zechariah!” She was followed by EWTN television hosts and crisis pregnancy center volunteers, Jim and Joy Pinto,  Joy stirred the crowd, declaring “There is a war on women but we are not declaring war, we have come to set women free!’

Following the rally Walkers headed out down Market Street to Justin Herman Plaza. The crowd appeared to be the largest yet. Attendees were from all over the country, and Canada, although the majority were from California and the Western States. As the Archbishop had noted, the Walk was given its particular flavor by the youth in attendance, although people of all ages, races, and creeds were there. Walkers processed under the Walk’s now famous “Abortion Hurts Women!” banners, which lined the route.

As always, the Walk was protested at Powell and Market Streets by Stop Patriarchy, an off-shoot of the Revolutionary Communist Party. About 50 protestors were there—outnumbered by pro-lifers by about 1,000 to 1. They attempted to get into Market Street to hinder the Walk, but the San Francisco Police Department quickly restored order.  As the Walk ended at  Justin Herman Plaza, Walkers were met by the Mariachi Juvenil Real de San Pablo, a mariachi youth band, and the young pro-lifers ended the Walk dancing to mariachi music.

This local press did their fairest job yet of covering the Walk. Local ABC, NBC, CBS, and FOX affiliates all had televised coverage, and SF Gate, the online version of the San Francisco Chronicle, had a sizable story with more than 20 photographs. The AP’s Lisa Leff covered the Walk, meaning that many newspapers that rely on AP for content ran her story, from Seattle to Greenwich, CT, and many places in between. A number of the local stories focused on the gridlock in downtown San Francisco caused by the size of the Walk.  Walk co-chair Eva Muntean was happy about the press coverage, but noted that the local press “… should at least mention the Walk the week before, if for no other reason than to prevent the kind of gridlock, and angry motorists we saw Saturday.”