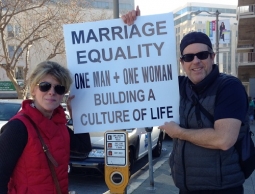 SAN FRANCISCO — Days before an estimated 50,000 people joined the 11th annual Walk for Life West Coast in San Francisco, two California state senators proposed a “right-to-die” bill that is expected to gain traction in the months ahead.

Catholic leaders and pro-life activists at the Jan. 24 event marked the ominous news and warned the vast crowd gathered under a sunny sky in downtown San Francisco that they could never relax their vigilant defense of the sanctity of human life.

“The Christian imperative to stand up and protect life is uniting Christians all over the country,” Bishop Michael Barber of Oakland told the Register.

“We started by protecting the unborn. Now, in California, we need to protect the elderly or those who have serious illness. Their lives are threatened by proposed new legislation giving doctors permission to euthanize them. The sick and elderly deserve so much better than poisoning.”