Home » 2014 Walk for Life » Pope Francis: “Many, many people make human sacrifices and there are laws that protect them.”
Mon18

Pope Francis: “Many, many people make human sacrifices and there are laws that protect them.”

In his daily homily today our Holy Father Pope Francis spoke on today’s first Mass reading, which was from Maccabees. 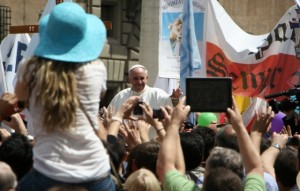 “In his daily homily Pope Francis cautioned against modern society’s push for a unified secular ideology, saying that this does not create positive globalization but rather an ‘adolescent progressivism’….

Calling attention to the 20th century novel ‘Lord of the World’ which focuses on this spirit of worldliness which leads to apostasy, Pope Francis cautioned against the attitude of wanting ‘be like everyone else,’ which he referred to as an ‘adolescent progressivism.’

Join us January 25 at the 10th Annual Walk for Life West Coast!