We were so blessed to have Mr. Daleiden as one of our keytnote speakers last year!

Steve Ertelt over at LifeNews has the story:

In a huge victory for the pro-life advocate responsible for uncovering the grisly business of selling body parts of aborted babies, StemExpress has dropped its lawsuit against David Daleiden. 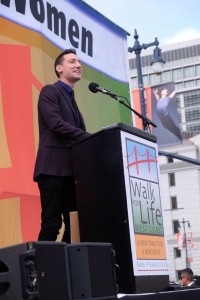 After it was exposed, StemExpress filed a lawsuit against the light and attempting to cover up additional video footage and information related to the sales of the body parts.

Today, StemExpress is dropping its lawsuit against The Center for Medical Progress and walking away with nothing.

“StemExpress was the first of Planned Parenthood’s accomplices to file a retaliatory lawsuit against citizen journalists and the first to seek an unconstitutional prior restraint on our First Amendment rights to speak and publish,” notes CMP Project Lead David Daleiden. “Now, the video is out for all the world to see, StemExpress faces criminal referral in multiple jurisdictions, and they are walking away from their own lawsuit empty-handed….”