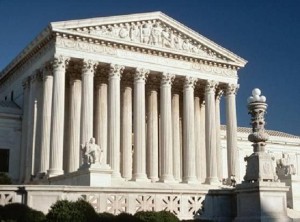 The U.S. Supreme Court has voted by a 5-4 majority to allow a key provision of a Texas pro-life law to take effect.

The majority ruled that a coalition of abortion providers had failed to prove that a Texas law requiring abortionists to have admitting privileges at a hospital within 30 miles of their office places an “undue burden” on women seeking an abortion.

“There is no doubt that the applicants have not carried their heavy burden of showing that” allowing the law to take effect “was a clear violation of accepted legal standards — which do not include a special ‘status quo’ standard for laws affecting abortion,” Scalia wrote.

The High Court’s liberal bloc ruled in a dissent that the law “seriously disrupts” women’s ability to get an abortion, the SCOTUS blog reports. Justice Stephen Breyer was joined by Ruth Bader Ginsburg, Elena Kagan, and Sonia Sotomayor.

“This ruling by Justice Scalia signals that Texas is on the verge of a decisive legal pro-life victory,” said Elizabeth Graham, director of Texas Right to Life. “We celebrate the U.S. Supreme Court’s approval of the law staying in effect until this absurd legal battle is over.”

Planned Parenthood, the ACLU, the Center for Reproductive Rights, and a coalition of Texas abortionists sued over two of the law’s key provisions, requiring abortionists to have admitting privileges at a hospital within 30 miles of the facility and to follow FDA guidelines in administering RU-486.

In late October, U.S. District Judge Lee Yeakel, who was appointed to the bench by President George W. Bush in 2003, struck down the law’s regulations on admitting privileges, as well as the administering of abortion-inducing drugs. Judge Yeakel wrote in a 26-page opinion that forcing abortionists to have admitting privileges would do nothing to reduce patient abandonment, such as Planned Parenthood was accused of in the case of Tonya Reaves, a young woman who died after an abortion in July 2012.

The Fifth Circuit Court of Appeals in New Orleans overturned Yeakel’s decision on the matter of admitting privileges just three days later. The abortion providers then appealed to the Supreme Court.

“The Fifth Circuit saw through Planned Parenthood’s shallow arguments, choosing to act in the best interest of Texas women by regulating the abortion industry,” said Dr. Charmaine Yoest, president and CEO of Americans United for Life on Tuesday. “Women have died when emergency care following an abortion was not quickly provided. Protecting women’s lives and health – inside or outside of an abortion clinic – should be an area of bi-partisan agreement.”