A young woman named Catherine Contreras share her experience of the Walk for Life West Coast at Catholic Online. 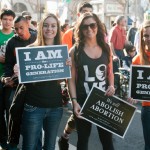 “Young people. The streets seethed with youth – huge bands of college kids shouted under school banners, and high schoolers gathered round signs with their school name plastered over it. But no, it wasn’t a concert or Occupy Wall Street Rally.

This was the 10th Annual Walk For Life in San Francisco. And it was one enormous flood of 25 and under, myself included.

‘Where else would I be?’ shouted one high schooler, hailing from the LA Archdiocese. He paused just long enough to answer my lobbed question, ‘I’m pro-life!’…” 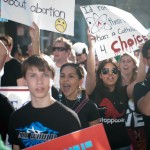 Though young and old have marched for years on both coasts, this weekend struck a new chord…By the end of the Walk, San Francisco was echoing with the pro-life chants, joyful chatter, and soul-piercing Latin hymns raised beautifully by the seminarians I had passed near the beginning.  Katie, a student who had travelled from Concordia University in Orange Country, finished the Walk right ahead of me and shouted out a last, ‘Hey-hey!’ before turning to me, ‘Roe v. Wade is old. Death can’t keep up with these young legs!’

This was the largest Walk For Life yet according to organizers – but it wasn’t just big: it was loud, it was joyful, it was unified. It showed me my generation as I’d never seen them – the pro-life generation… 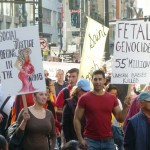 That is a youthful unity. That was the theme at the 10th Annual Walk For Life. That’s the walk that spells out the end of abortion in the United States, and it looks like a huge tide turning towards transforming a culture steeped in death – abortion – into one on-fire to protect all life, preborn to natural death.”