“The Culture of Death Begins to Crumble”

Here are some excerpts from a detailed and passionate article about the Walk for Life West Coast at Quartermaster of the Barque:

Report on WC WFL 2014: The Culture of Death Begins to Crumble 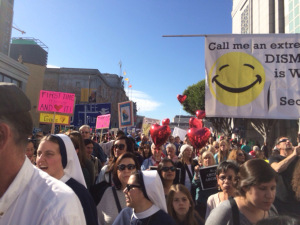 Courtesy Quartermaster of the Barque.

The clouds parted last week for the marchers at the 2014 West Cost Walk for Life, and I might as well put the takeaway at the very beginning: we are winning, in spite of the fact that the Culture of Death seems to be holding all the cards!

How is this possible? The Culture of Death has the mainstream media, whose journalistic integrity does not extend to covering the massive crowds that gathered across the nation seeking an end to abortion….

WC Walk for Life was flippin’ unbelievably awesome, because it was a presentation of the human evidence that is the lie of abortion. Lines of brave women carrying signs giving testimony: “I regret my abortion.” A young couple holding their baby aloft in one set of arms, and holding up their homemade sign in the other: “Our baby survived his abortion appointment”. Pro-lifers identifying themselves as Catholic, Anglican, Lutheran, Protestant, and Secular (!) walking together in support of the same cause.

If Walk for Life were not about abortion, it would have been widely reported by media outlets, due to the sheer number of the gathering — in excess of 50,000 people, possibly up to 70,000 or so — who gathered peacefully (no incidents!), who placed their trash in garbage receptacles, and who did not trouble or harass law enforcement…