Here is a second article from The Wanderer, the nation’s oldest Catholic newspaper, on the Walk for Life West Coast. Excerpt: 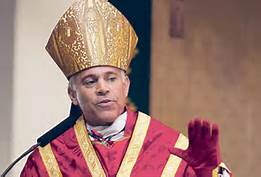 As an African pro-life leader saluted U.S. pro-lifers and urged them to continue their fight for babies and moms around the world, two American pro-life strategists told The Wanderer of plans to help keep abortion giant Planned Parenthood in disarray.

This was part of the scene January 23 at the nation’s second-largest annual pro-life gathering, the Walk for Life West Coast, which assembles on the broad plaza in front of San Francisco City Hall for speeches, then marches curb-to-curb on major thoroughfare Market Street through downtown.

Before the 12:30 p.m. rally, Catholic Archbishop Salvatore Cordileone celebrated a packed 9:30 a.m. Mass at St. Mary of the Assumption Cathedral, which looks down from a hilltop onto City Hall. He commented in his homily about Catholics who unworthily receive the Eucharist.

Cordileone didn’t mention names. However, local Democratic Cong. Nancy Pelosi has become renowned for energetically promoting the Culture of Death while claiming to be a faithfully practicing Catholic and receiving Communion….