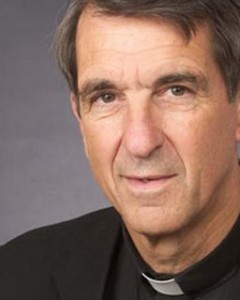 On January 29, 2015 noted Vatican watcher Sandro Magister published a column detailing the response of Fr. Joseph Fessio, SJ, founder of Ignatius Press, co-founder of USF’s legendary Ignatius Institute, and chaplain of the Walk for Life West Coast, to a recent statement by French Jesuit Pierre de Charentenay. In the pages of the Jesuit journal La Civiltà Cattolica, Fr. de Charentenay had “slammed the Filipino bishops for being ‘backward’ and ‘closed off’” because of their Excellencies opposition to a recently passed “reproductive health” in the Philippines. De Charentenay also took a few swipes at Filipino culture.

Magister describes de Charentenay words as “…clearly disparaging toward the cultural limitations that he identifies in the Catholicism of the Philippines” then quotes de Charentenay’s description of the Filipino Church as being: “close to a Latin American spirituality, expressive along the lines of the Spanish model but without the liberal tendencies inherited from the Enlightenment or the French Revolution.”

These Europeans, who come from places where both birth rates and church attendance have plummeted, need to ‘check their privilege’ as the young people say nowadays. De Charentenay’s attitude is identical to Cardinal Walter Kasper’s contemptuous dismissal of the African bishops at the recent synod on the family, asserting that the views of African bishops are not listened to. Here’s some news for you, Eminence: the African bishops are gratefully listened to, by the faithful in Africa and all over the world.

Fr. de Charentenay and Bishop Kasper are part of what Pope Francis recently described as ‘ ‘new ideological colonization that tries to destroy the family.’  Two weeks ago, in (of all places) the Philippines, Pope Francis “warned against increasing efforts ‘to redefine the very institution of marriage, by relativism, by the culture of the ephemeral, by a lack of openness to life.’”

Magister continues “From San Francisco, after reading the rejection of the Filipino bishops decreed by Fr. de Charentenay because of their closure to modernity, the Jesuit Joseph Fessio reacted by sending us the letter reproduced below.

I am deeply saddened and distressed by what Fr. Pierre de Charentenay has written. It is all the more damaging because the book, as you have described it, is otherwise a serious and informed work.

Here are two passages which I find especially noxious, even though – perhaps because – they give expression to widespread, but false, opinions.

1. Fr. de Charentenay writes: “In the discussion, the Catholic Church never mentions the proliferation of abortion, a reality decidedly more serious than the contraception it is fighting. The two things are connected, because abortion is the means for avoiding birth when contraception is not used. The greater evil follows the lesser evil.”

Is it true that abortion is a greater evil than contraception, even “decidedly more serious”? Not necessarily. Take the case of  married couples who without grave necessity use contraception to postpone having children for years after they are married. Certainly in some cases it is God’s will for them to be open to new life. Which then is the graver evil? To prevent the conception – and very existence – of a human being with an immortal soul, desired by God and destined for eternal happiness? Or to abort a child in the womb? The latter is certainly a grave evil, “Gaudium et spes” calls it an “abominable crime”. But a child exists who will live eternally. In the former circumstance a child God intended to be will never exist.

Certainly contraception is widespread, even among married Catholics. But, just as in the millions upon millions of procured abortions that have taken place in recent years, the profound question is raised: How can God allow such evil to proliferate? There are no easy answers to this “mysterium iniquitatis.” And that means that the easy answer – that an evil like contraception is not really serious – is unacceptable for a Christian. God’s ways are not our ways. But that does not negate knowable fundamental principles, one of which is: it is a greater evil to deprive someone of existence than to deprive someone of temporal life.

2. Fr. de Charentenay writes: “The RH Bill was conceived of to assist the poor populations and permit them to have access to the contraception that the middle class and the wealthy are already using. The different social groups do not have the same opportunities on this point. So the RH bill responds to a question of justice that is motivating the government on behalf of these poor populations.”

The pernicious error here is obvious and needs little comment: because the wealthy are able to circumvent a law proscribing a grave evil, then the law should be abolished so that the poor are not deprived of the same opportunity.

I am not saying that there cannot be sound reasons for the Church in some circumstances to tolerate laws which permit a moral evil. However the claim that it is a “question of justice” is not one of them.

Fr. Fessio is a true son of Ignatius: brilliant, fearless, faithful. We are blessed and proud to have him as our Chaplain!