Walk for Life Becoming a Pilgrimage Destination for Catholic Youth

“We want them to feel loved and welcome.  We want to serve them with love.”

On Saturday, January 24, Archbishop Carlo Maria Viganò will join at least 10 Catholic and two Anglican bishops at the 11th Annual Walk for Life West Coast in San Francisco. The Nuncio, Pope Francis’s ambassador to the United States, will bring a message from the Holy Father to the tens of thousands of pro-lifers of all races and creeds in attendance.

The Walk, which begins at 1:30, is preceded by the Walk for Life rally, featuring speakers who put a personal face on the Walk’s message “Abortion Hurts Women.” That message is apparently so threatening to the Democratic power structure of San Francisco that last year they issued a resolution condemning the Walk’s banners which proclaimed that message to the city’s people. Their ham-handed attempt to hobble free speech earned the city’s Board of Supervisors nationwide ridicule. This year, despite the Supervisor’s efforts, the Walk’s banners once again adorn Market Street without any public objection.

Rally speakers include Julia Holcomb, who became the legal ward of Steven Tyler of the band Aerosmith. Becoming pregnant at age 17 she was coerced into having an abortion, an experience which changed her life. With the help of her faith, Ms. Holcomb rebuilt her life, and now works for the strengthening of life and the family. Ms. Holcomb will be joined by Jim and Joy Pinto,  the hosts of EWTN’s “At Home with Jim and Joy,” where they share the pro-life message and discuss both the challenges and joys that families face in contemporary America. The Pintos have been married for 37 years and are blessed with four children and 15 grandchildren. The Pintos will be followed by Rebekah Buell, who, when young and pregnant for the second time, was consumed by hopelessness and took the RU-486 abortion pill. The outcome of her story will be shared at the Walk. The final speaker is the Reverend Clenard Childress, a fiery orator, who has been with the Walk for Life West Coast since its inception. He is the founder of blackgenocide.org, and has spent his life fighting against the horrific rates of abortion in the African American community. 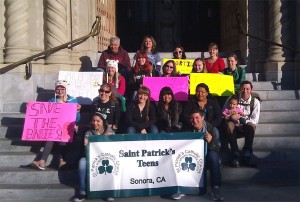 Since its founding in 2005, the Walk for Life West Coast has become the largest annual event in the Catholic Church in the Bay Area, and one of the largest in the country. For thousands of young people the Walk and its associated events have become a genuine pilgrimage. They come from far and wide, from parishes, and high schools and colleges, by car, by plane, and by bus. They sleep on floors. And their effort has brought out the best in some local churches, Catholic elementary and high schools, and religious institutes—all of which have extended hospitality to the faithful youth. One of the hosts told Lisa Hamrick, a Walk co-founder, and the event’s housing coordinator  “We want them to feel loved and welcome.  We want to serve them with love.”

Ms. Hamrick told CalCatholic that about 700 youth and young adults from as far away as Washington, Oregon, New Mexico, Arizona, and  Nevada (not to mention from all over California) had used the “Housing Registration” function on the Walk’s website to request lodging during the Walk. They will stay with five local churches and three religious orders. 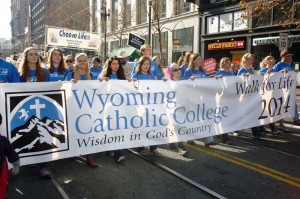 While the young people come all the way to San Francisco explicitly to stand in defense of children killed by abortion and as witnesses to hope for a better future, their concrete presence as the Church Militant has served as a wake-up call to the local Church. And the churches have responded with steadily increasing efforts to nurture the youth, both spiritually and recreationally.

Spiritual opportunities include the Vigil for Life at San Francisco’s St. Dominic’s Church, hosted by the Sisters of Life, which includes adoration and confessions  and Mass celebrated by San Jose’s dynamic young Auxiliary Bishop Thomas Daly; all-night Eucharistic Adoration at San Francisco’s Saints Peter and Paul Church (both events on the night before the Walk). Opportunities on January 24 include the Walk for Life Mass at St. Mary’s Cathedral at 9:30 AM, celebrated by Archbishop Salvatore Cordileone and concelebrated by 10 bishops and many priests from San Francisco. Following the Walk, a special Mass in the Extraordinary Form will be celebrated at St. Francis of Assisi Church in San Francisco at 5PM; and, at 9:00PM, Star of the Sea parish in San Francisco will host Holy Hour. Neighboring dioceses have stepped up as well: on January 23, from 4:00-9:00PM the newly formed Humanity and Life Ministry of the Diocese of San Jose is hosting a Pro-Life Youth Rally at Our Lady of Peace Church in Santa Clara, and, on January 24 at 7:30PM Oakland’s Bishop Michael Barber hosts a Catholic Underground event for young people at St. Mary Magdalen Church in Berkeley. On the day after the Walk, Sunday, January 25, the Students For Life of America will host their Second Annual West Coast Conference (an all-day event) at St. Mary’s Cathedral.

(A shorter version of this post appeared in today’s California Catholic Daily.)