A few days ago our new Walk for Life West Coast banners went up along Market Street.  Not everyone was pleased! On December 31, Heather Knight, writing at SF Gate/Sf Chronicle did a story titled Holiday furor over anti-abortion banners on Market Street. Ms. Knight wrote:

“A group called Walk for Life West Coast, which is organizing its 10th annual antiabortion march in San Francisco on January 25, has placed 50 banners along Market Street reading “Abortion hurts women.” They will be flying for about a month.

The Silver Ribbon Campaign to Trust Women wrote a letter to Mayor Ed Lee this week saying the banners contain ‘a false and hateful statement’ and demanded they be removed.”

Here’s what  they consider “hateful”: 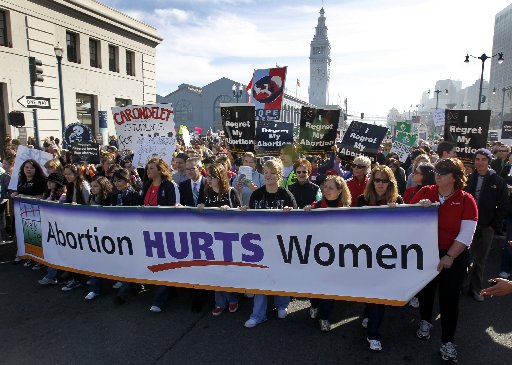 They fear our message. They fear it not because it is false, but because it is true. They can’t contend with us on the level of ideas, so they try to prevent us from being heard. Calling this “hateful” is  the kind of thing people do when they have nothing else to offer.  We invite anyone who objects to a banner that says “Abortion HURTS Women” to come to the Silent No More Awareness rally which preceded the Walk every year.

Just listen to them and decide for yourself if what you are hearing is “hate speech.”