Today’s California Catholic Daily has an article on the Walk for Life West Coast: 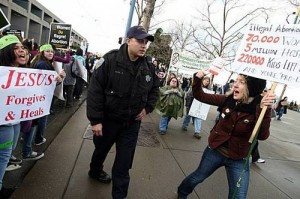 On January 25 the Walk for Life West Coast will be held in San Francisco. This year’s Walk marks the 10th anniversary of the event.

The promotional video for the 2014 walk begins with a January 20, 2005 quote from Dian Harrison, the then-chief executive of Planned Parenthood Golden Gate, who told the San Francisco Chronicle “We couldn’t believe that they had the nerve to come to San Francisco.” Whether Ms. Harrison (who was fired from her $340,000 a year position with PPGG in 2010–PPGG itself filed Chapter 7 bankruptcy in 2011) can believe it or not, this year’s Walk for Life West Coast is poised to be the largest yet.

Fifteen Catholic bishops have confirmed attendance at the event, and the weekend surrounding the walk has become the largest venue for Catholic and pro-life events in the Bay Area and probably in California….