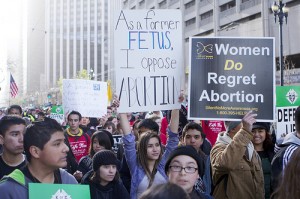 “We have grown amazingly,” Eva Muntean, a co-chair of the event, told EWTN News on Nov. 30. “We began with about 5,000-7,500 people in 2005 and we have grown every single year, both in size and in the ecumenical and multi-ethnic composition of the attendees.”

The walk will proceed down Market Street then turn on McAllister Street towards its destination at Justin Herman Plaza, a route of under 1.8 miles.

Speakers include Lacey Buchanan, a mother whose video about herself and her blind son encouraging people not to choose abortion has drawn over 11 million viewers on YouTube; Elaine Riddick, who was forcibly sterilized at age 14 at the orders of North Carolina’s Eugenics Board; and Rev. Clenard Childress, the founder of the BlackGenocide.org website that aims to show the African-American community the truth about abortion.

Kelley and Matthew Clinger will talk about their life in the music industry and the pain caused by abortion.

Actress and model Jennifer O’Neill, the national spokeswoman for the Silent No More Post-Abortion Awareness Campaign, will take part in the pre-rally Silent No More program.

Muntean said organizers feel Jesus and the Virgin Mary are “always with us.”

They have been “happily surprised” by some of the happenings during the walk. Last year, young participants discovered they could create a “sound wave” that echoed off the tall buildings along Market Street. The noise brought those inside the buildings to their windows.

Muntean said first-time attendees should anticipate having “one of the most fun, informative and spiritually enriching experiences of your life.” She said walkers give “a peaceful witness, sometimes in the face of hostility.”

She also had a message for those who feel demoralized by the election.

“Culture does not follow politics, politics follows the culture. It is our job to change the culture, and we are succeeding,” she said, pointing to survey results showing 50 percent of Americans consider themselves pro-life.

“Public policies come and go, but the courage and righteousness of individuals persevering to protect the most vulnerable in our midst is what will be remembered for generations to come,” Meehan said Nov. 29. “Now more than ever, we must stand and be counted in the public square.”