Check this out! Our pro-life brothers and sisters in Lima, Peru (estimate 800,000!!) marching for the least among us! And they were joined by others throughout Latin America! 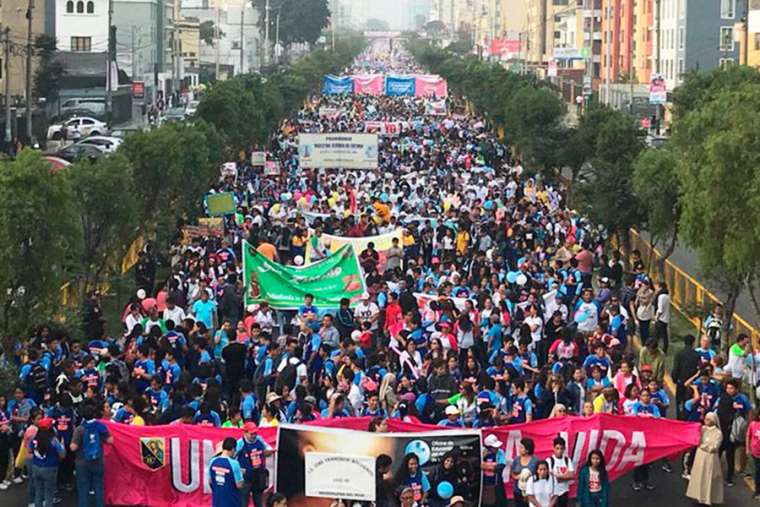 ACI Prensa (via Catholic News Agency) has the story:

Lima, Peru, May 7, 2018 / 03:32 pm (ACI Prensa).- Huge crowds across Latin America took to the streets in recent days to call for the protection of human life from conception to natural death.

On May 5, some 400,000 Colombians in 53 cities across the country turned out for pro-life marches.

“The right to life is the first right that every human being has. It cannot be manipulated, nor limited, it can only be recognized and protected by the State and society. To violate this right, or to ignore it even with rulings issued by the courts is the most serious crime,” the organization said…

In Peru, an estimated 800,000 people turned out on the streets of Lima May 5 to defend the lives of the unborn. The right to life is upheld by the nation’s constitution and civil code; however, various organizations within the country – including those financed by foreign NGOs – have been seeking for years to legalize abortion in the country. In 2014, the government decriminalized abortion in cases where the mother’s life or health were deemed to be in danger.

Participating in the Lima event were Catholics and Christians of various denominations, young people and the elderly, pregnant women, families with children and babies, and people with disabilities.

Addressing the crowd, Cardinal Juan Luis Cipriani of Lima urged those assembled to be “a visible believing people, as we are now… when it’s necessary, we take to the streets… in the name of all those who have gone on before us, to give to the next generation life and the family.”

In Mexico, about 22,000 people turned out for the Great March for Life April 28 in the capital, Mexico City. While abortion is banned in much of the country, it was legalized in 2007 in Mexico City for the first 12 weeks of pregnancy.

They said that the vast majority of Mexicans are pro-life and that “we are tired of not being properly represented by those we ourselves elect. We’re tired of the attempts to shut us up, to silence even our thoughts.”