For those who have not heard of him, Zombie is a well known San Francisco photojournalist and reporter, who records many demonstrations in the Bay Area. Don’t let the name fool you, “Zombie” is a serious man. He has been pivotal in a number of exposès that were then followed up by the mainstream media: “Anatomy of a Photograph”, “Obama’s Science Czar,” etc.

Zombie, who describes himself as “mostly pro-choice” attended the Walk. His testimony as to the number of attendees is significant because first, he is not on our side, and secondly, because he has more experience covering San Francisco demonstrations than just about anybody.

Below are three of his pictures and with the accompanying text, courtesy Zombie and Pajamas Media. Caution: the site has some vulgar images of our opposition. 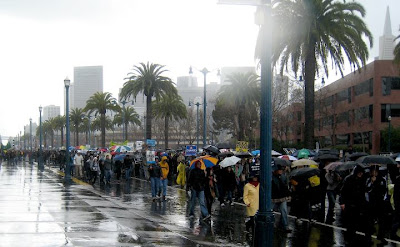 “After the march was already well under way, I stood in one spot and took a picture looking back toward one end of the human column — which you can see extends off to the horizon… 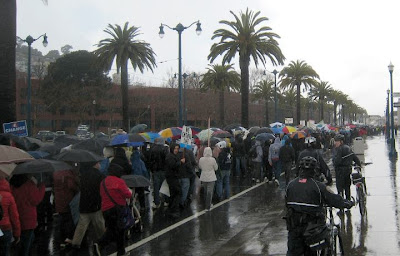 ” …and then pivoted and took another photo toward the other end — which also extends beyond the visible horizon. I’ve been to anti-war rallies which were estimated to have in excess of 100,000 people, and they all seemed smaller than the one seen here. Only 40,000? If you say so….” 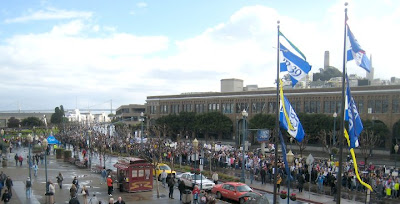 “But those two pictures only showed the back part of the column. I ran ahead and climbed up a staircase to snap yet another picture showing a different segment of the march not visible in the previous photos, streaming around a curve in the Embarcadero and once again disappearing off into infinity in both directions.”