Despite the threat of rain,we had well over 30,000 people walk in support of life! 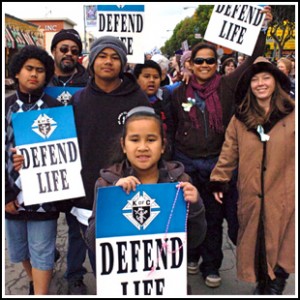 We stood together as one – and it showed. It showed in your enthusiasm and support of the wonderful Speakers. It showed in your faces through your laughter, your joy, your songs of praise, and your tears! It showed in your prayers and concern for all those who have been ravaged by the scars of abortion. It showed by your beautiful willingness to weather the elements and the difficulties of travel, to gather together as one voice, as one mind, and as one heart to represent the Culture of Life (even here in San Francisco!). One of our Speakers at the WFL Rally, Mother Agnes Mary, when asked of her experience speaking to the vast crowd, said in reply –

“I FELT the goodness of the people gathered there!”

The day arrived with anticipation.

As busloads of people began to fill Justin Herman Plaza, EWTN began their LIVE broadcast at 10:00 a.m. with Pre-Rally interviews of each of the WFL Speakers. As usual, we were blessed with a vast array of wonderful Speakers who each lent their own unique perspective at the Rally.

of Asian Americans Against Abortion energized the crowd with “we shall overcome!” as he made very lively and emotional appeals in English, Cantonese, and Mandarin.

a singer who had placed her son for adoption after becoming pregnant at 15, was a very beautiful witness of the joys of Adoption. The embodiment of her choice for life was made visible for the world to see – in the person of her wonderful son who stood there with his birth mother on the stage!

of the Sisters of Life, told the beautiful story of a pregnant mother, Raquel, who while living under the Sisters’ care was able to reach out with love and compassion to another woman also in a crisis pregnancy, thereby saving the lives of this other woman’s twin girls. Mother Agnes’ exhortation to the crowd: “Let us pass on the love. Let us tell the truth, let us change the world.”

of Feminists for Life, who had once been a very strong proponent for abortion, stood alongside her husband and gave her own personal testimony of the scars and ravages of abortion.

has been a most faithful Speaker each year at the WFL Rally. He has a special gift for energizing the crowds ― “We thank God today for this moment. You’re not going away, I’m not going away. This is our moment.” Nearby on stage was Rev. Walter Hoye, whom many of you know has put his very life on the line, to defend the lives of the unborn in the city of Oakland.

It was in this spirit, that the very energized and faith-filled crowd embarked upon the long procession of humanity as we made the 2.5 mile Walk down along the Embarcadero, through Pier 39 and Fisherman’s Wharf, and ended up at Marina Green.

Very Special thanks go out to everyone who contributed to the Pastor Walter Hoye Defense Fund at Marina Green by buying bottled water and through your personal donations. It is because of your kindness that we raised $2,564.91 for Pastor Hoye’s Fund! Some of you were able to greet Walter there at Marina Green. Please know that your continued prayerful support means a great deal to Rev. Hoye and his family.

Many thanks once again to the wonderful crews of EWTN and Immaculate Heart Radiofor their outstanding LIVE broadcast coverage of the Walk for Life.

Special note of thanks to our official WFL photographers, Darwin Sayo and James McKenzie. Each of you did an outstanding job, and we are so proud to have you on the WFL team!