The entire pro-life community of California is united in both sorrow at his passing and in gratitude for all George did for the least among us. Dolores Meehan, co-chair and co-founder of the Walk for Life West Coast writes: 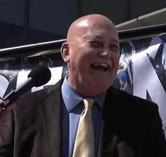 Our relationship with George began in March 2004, while we were planning a Rally in Defense of Marriage. He welcomed our ‘radical’ group, and convinced first Archbishop William Levada, and then Oakland’s Bishop Allen Vigneron, they needed be there with us. As a result, both led us in our inaugural journey into the public square. The success of the Marriage Rally gave birth to the Walk for Life West Coast. George was untiring in his defense of the vulnerable, especially the unborn; there was nothing he wouldn’t do to help make the Walk for Life a success

George loved the Church and served her faithfully. He was a quintessential gentleman but could also muster fiery righteous anger when the rights of the poor and vulnerable where threatened. At the March 2012 rally for Religious Freedom in San Francisco, George reminded us how religious sisters came to San Francisco in the late 1800s and founded orphanages, hospitals and schools. He told the crowd, “according to the HHS mandate, those activities would no longer be considered religious expression.  Unbelievable!” After every statement, (and much to our delight) George got the crowd to chant with him “Unbelievable!” (What was really unbelievable was gentle George leading chants at a rally!)

I think our work energized George; we certainly felt cherished and protected by him. He was simply a lovely man and we will miss him greatly – may he rest in peace.

Dolores, Eva and the whole Walk for Life Crew 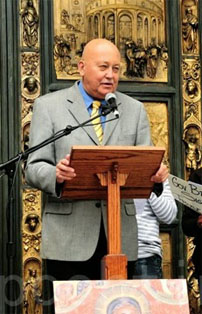 George Wesolek died recently. With him died an era. George was the Director of Public Policy and Social Concerns for the Archdiocese of San Francisco. When he took over this position more than 25 years ago, the landscape in San Francisco was very different from what it is today with respect to pro-life issues. There was no Walk for Life West Coast. There was no 40-Days for Life. There was little support in the local Church hierarchy for life issues after Roe v. Wade made its “statement” on behalf of America. Social justice issues were prominent and embraced and accepted; life issues were less significant and much less acceptable in polite company. But George championed both issues equally, a bit of a heresy for his age. He encountered opposition at USCCB conferences and on the Catholic Charities Board of Directors when he equated life issues with social justice issues. But his resolve never diminished. His love for the poor—and he deeply loved the poor—never eclipsed his support for the unborn, those who had no one except the Catholic Church to speak for them.

Fast forward 25 years. We now have an Archbishop in San Francisco who considers life issues a top priority. Pro-life culture is now more embraced. Today it is easier to be pro-life because there is more widespread active support from a greater number of bishops. But it was not always so. Ten years ago when the Walk for Life West Coast came into being, George Wesolek was the one who believed in it, sanctioned it, argued on its behalf, sent resources to it and made it a priority of the Archdiocese of San Francisco. I would venture to say that the Walk for Life would not exist in its present form had George not stood with its organizers from day one, convincing the powers that be that it was all right to be involved with such a radical idea. George had vision, took chances, because it was right. He was called the “guardian of orthodoxy” in a derisive tone by some of the more politically correct in local Catholic circles.

Today, the Archbishop of San Francisco and the Archdiocese of San Francisco have an easier road to embracing orthodoxy when it comes to life issues. George embraced it when it was hard. In terms made famous by Dietrich Bonhoeffer, George demonstrated costly grace, not cheap grace. We are where we are today because of his acceptance of avant-garde ideas when they were unpopular—even inflammatory. We shouldn’t forget our history or discount those who made the sacrifices which are the foundation of what has been built. In characteristic human fashion, however, George’s contributions will be discounted and forgotten by the world in which we live. But I am certain his reward is great in heaven.