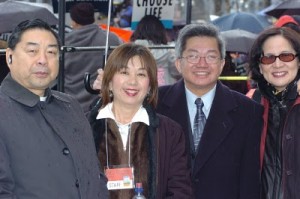 One of the great things about the Walk for Life West Coast is that it attracts people of any religion: Catholics, many Protestant denominations, Russian and Greek Orthodox, Jews, Muslims, worshipers of Krishna and many others, as well as non-believers, such as Secular Pro-Life. Every ethnic group is also represented: Asians from many cultures, Pacific Islanders, Hispanics, blacks (Africans, West Indians, and African-Americans) and whites (Europeans and Americans). All united in defense of the littlest among us!

One group that has been a big plus is Asian Americans Pro Life, a group of Chinese-Americans, mostly from the Bay Area. They’ll have a big presence again this year. This year Asian Americans Pro Life will be led by Dr. Evelyn Li, M.D., F.A.C.C,  and founder and Chairman of Patients’ Advocates, and leaders of the Chinese Christians Union. The Chinese Christians Union represents all Chinese American churches in SF.  Here’s a message from Dr. Li:

“We have been involving in this for several years.  This is so meaningful. More and more Asian Americans especially Chinese Americans have been participating in Walk for Life mainly due to our promotion in the last few years.  They understand how momentous and meaningful the walk is.  For example, now Chinese American media cover the event all the time and the news is being spread to Chinese communities everywhere including those in foreign countries.

Asian Americans believe that every life is precious and should be cherished.  We understand that freedom does not give us the right to kill.”

The picture above is from the 2010 Walk for Life West Coast, and shows members of the Asian American Pro Life Community. That’s Dr. Li, second from left, flanked by Rev. Dr. Franco Kwan of the true Sunshine Episcopal Church and then-Chairman of the Chinese Christian Union of San Francisco, and our old friend Mr. Frank Lee of Asian Americans Pro Life on her right. Far right is Dr. Olivia Hsia, M.D. Dr. Hsia has said that she has saved more lives by speaking out against abortion than by being a medical doctor!