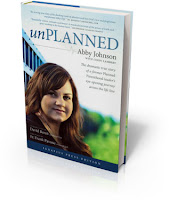 The release will be preceded by a webcast on Monday, January 10 at 9:00 PM East Coast time.

The webcast is free, and you can go here to register: http://unplannedwebcast.com/

From the “Unplanned” webcast site:

“After winning the legal battle against a massive Planned Parenthood lawsuit and restraining order – which was intended to silence her – former abortion clinic director Abby Johnson is finally ready to blow the whistle on her former employer and tell the shocking truth about everything she saw inside the abortion industry — and why she resigned her job to join the pro-life movement.

Abby’s entire story has never been revealed publicly … UNTIL NOW!

On Tuesday, January 11, Abby’s story will be released to the world in her landmark book, Unplanned, published jointly by Tyndale House, Focus on the Family, and Ignatius Press.

One night before — on Monday, January 10, at 9 PM Eastern (8 PM Central, 7 PM Mountain, 6 PM Pacific) – YOU are invited to join Abby for a live webcast “sneak preview” of the no-holds-barred revelations which fill the pages of her book.”