Cardinal Newman Society on Faithful Catholic Students at the Walk 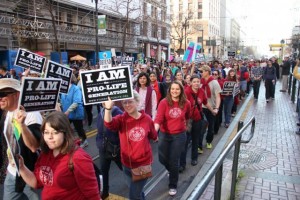 Students from Thomas Aquinas College (TAC) in Santa Paula, Calif., and Wyoming Catholic College (WCC) in Lander, Wyo., joined the tens of thousands of participants at the 2015 Walk for Life West Coast in San Francisco last weekend, according to Catholic San Francisco.

The Walk for Life is the largest pro-life demonstration in the Western United States, second in the nation to only the National March for Life in Washington, D.C., and draws large crowds of youth and college students each year.  More than 50,000 people reportedly participated in the 2015 walk.

More than 200 undergraduates from TAC and 60 from WCC were among those who gathered for the pro-life rally and walk this year. TAC students helped to lead the walk and also helped to direct people and traffic throughout the event.