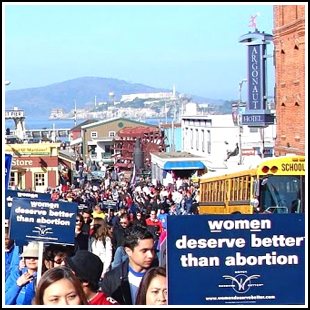 “I was aborted and did not die,” Gianna Jessen told the cheering crowd, but added, “I will limp my way into heaven” because she bears the mark of the saline abortion — cerebral palsy — that was meant to end her life at a Los Angeles clinic.

“The abortionist signed my birth certificate,” Jessen said. However, she noted, “My life is not defined by abortion. I am not a victim, I am a victor.”

Jessen was one of four speakers at the Walk for Life rally at the foot of Washington Street and the Embarcadero. Alveda King, the niece of Dr. Martin Luther King Jr., BlackGenocide.org founder Rev. Clenard Childress, and radio host Jesse Romero also spoke.

Alveda King, the niece of slain civil rights leader Dr. Martin Luther King, Jr. sounded the key theme of the day. After leading the assemblage in the civil rights song, “This Little Light of Mine,” King left early to catch a flight back to Atlanta for a family dinner to celebrate her uncle’s birthday

The crowd marched for 2.5 miles, carrying banners that proclaimed “Abortion Hurts Women” and “Women Deserve Better.” About 250 pro-abortion protesters chanted and jeered alongside the pro-life walkers.

“We care about life from the womb to the tomb,” Mrs. King said. “My uncle said injustice anywhere is injustice everywhere. Dr. King said that the Negro cannot win if he is willing to sacrifice the future of his children for personal comfort and safety. So here we are on behalf of the children, the future generation.”

“We are pleased by the growing numbers and this is clearly a movement that is taking root in a city known for its trend-setting,” said Walk Co-Chair Dolores Meehan. The first Walk in 2005 drew more than 5,000 and last year’s Walk drew about 20,000 people.