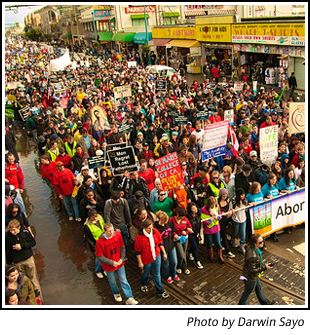 California had been pounded the last couple of weeks with one storm after another, but you didn’t let that keep you away. You came to San Francisco by the tens of thousands. Often huddled together under umbrellas as the pouring rain let loose from the Heavens, the rain never dampened the spirit and energy of the vast crowd assembled together to proclaim one voice as we Walked for Life! The Heavens may not have cooperated (weather-wise) as much as we would have liked, but somehow none of that seemed to matter. As one of the participant’s wrote to us afterwards: “In spite of the cold feet from standing in the mud, the holy water from the skies washed us all and allowed us to appreciate the sun for the end of the event.” You stood together as one – whether it was pouring rain or whether it shined! You stood up for the rights of the unborn! You stood up for those who could not speak! Your very presence under rather difficult conditions at times, made your witness all the more palpable and beautiful!

We thank all who participated and came from far and near to walk and pray with us — from all over the United States and Canada! We thank the many organizations, groups, schools and universities, who really have been promoting the Walk for Life throughout the year back in your own hometowns. We thank in a special way: all those who volunteered on the day itself in one way or another; the many vendors who participated in our Info Faire at the Marina Green; Silent No More Awareness and Immaculate HeartRadio who had your own programs on your stages at Marina Green; and the many vendors who offered all types of goodies to feed the hungry masses as they gathered on the soggy lawns at Marina Green. We couldn’t do this year after year without all of you – we offer you our heartfelt thanks! Lastly, we offer our humble thanks to the countless legions of people around the world — who while not able to physically participate, nonetheless are with us each year in spirit and heart through your many prayers and sacrifices!

This year, we were delighted to present The St. Gianna Molla Award to David Bereit, National Campaign Director of 40 Days for Life. He challenged the crowds when he said: “We come here not out of convenience, but out of conviction . . . as we hear that call to speak up for those who cannot speak for themselves, we have a decision to make. Will we ignore the call and pretend it didn’t happen, or will we say YES?! What are you going to say today?!”

coordinator of Asian Americans Pro-Life, led the rally in a prayer at the start, saying: “Every life is precious and should be cherished.  We have a tough battle in front of us, but we shall overcome when we combine our efforts to make it a perfect whole!”

one of the Organizers of the Marche Pour le Respect de la Vie which is held each January in Paris, came to speak and participate with us all the way from France! We are very blessed that San Francisco and Paris are now truly sister-cities as we cover both sides of the globe and stand together in spirit and heart to proclaim the sacredness of all human life from conception!

a former Director of a Planned Parenthood Clinic in Texas, was most warmly received with enthusiasm and support from the gathered crowd. Abby has seen first-hand the ravages of abortion from inside a clinic. Her words were powerful and clear – “If you’re here, you’re an activist!”

President of Live Action, addressed the crowds at the Rally with these powerful words – “Look around at your neighbors . . . what you’re looking at and what you are is the greatest of God’s creation. And that’s really why we’re here today. We’re not just here today because abortion is ugly, because it hurts people, because it’s evil. We’re here because of the person next to you and because of yourself. Because, we’re made in the image of God. Because, what we’re fighting for, not just what we’re fighting against, is the ultimate dignity of the human person made in God’s image!”

Lead Pastor of Skyline Church in San Diego, gave a very heartfelt talk:“As an Evangelical Protestant, I want to ask forgiveness for any ways in which we put division between us. Praise God, those days are over! And because of this oneness, because of this oneness, we’re going to see an outbreak of morals in this country and spiritual renewal . . . we’re seeing the precursor of a great revival and spiritual renewal coming to our land today.”

with Georgette Forney, of the Silent No More Awareness Campaign, delivered their powerful and moving post-abortive testimonies. There are no more powerful witnesses than those who have borne the scars of abortion and can turn and offer hope and healing to others who are suffering from the effects of abortion.

Director of LEARN, rallied the crowd before everyone left the Plaza for the Walk: “You are the only movement that can bring America back to its’ rightful place. You are the only movement that says ‘we hold these truths to be self-evident, that all mankind is created equal’. . . You believe that! You believe that all of our citizens have the right and should have access to the dream and the right to life!”

As the vast crowds moved out of Justin Herman Plaza towards Marina Green in the pouring rain, the mood was neither dreary nor somber. On the contrary, our hearts and spirits were full of energy and light. Countless prayers, hymns, songs, and words of praise were said as the crowds moved down the Embarcadero towards Pier 39 and Fisherman’s Wharf. It was a very moving and beautiful sight to behold – people walking as far as the eye could see!

[learn_more caption=”A Word of Thanks”] As always, we want to express our heartfelt gratitude to the men and women of the San Francisco Police Department who provide such tremendous security and service during the WFL events. Please join us in thanking them by writing to: Chief George Gascon, Hall of Justice, 850 Bryant Street, San Francisco, CA 94103. [/learn_more]