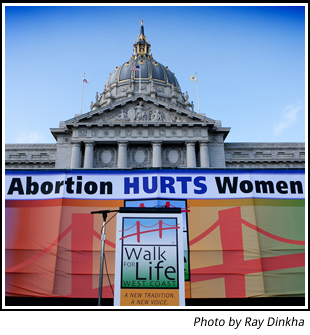 and then filled the city’s main thoroughfare, walking about two miles down Market Street to the Embarcadero.

Banging drums, playing guitars and chanting “We are pro-life,” the enthusiastic throngs filled Market Street and stopped all traffic for more than a mile. Organizers estimated more than 40,000 attended the Walk.

“We are here to say life is the choice and women are hurt by abortion,” said Dolores Meehan, co-chair of the Walk for Life West Coast, which is held on the Saturday closest to the anniversary of the Supreme Court’s 1973 Roe v. Wade ruling legalizing abortion.

Walk co-chair Eva Muntean urged participants to sign petitions to put a parental notification of a minor’s intent to procure an abortion on the California ballot and urged support for a state initiative for a personhood amendment.

At the rally, Dr. Vansen Wong, an ob-gyn, told his story of performing abortions to pay off his medical bills, saying he ended hundreds of lives over the course of seven years working at an evening abortion clinic for his employer. “Abortion is barbaric, abortion is intolerable,” said Dr. Wong, who now works with a pro-life medical clinic where pregnant women receive ultrasounds. “Abortion has no place in any civilized society,” Dr. Wong said.

A former Miss West Virginia, Jacquie Stalnaker told of being forced at gunpoint to go to an abortion clinic by her boyfriend and of the toll it took for 24 years.  Stalnaker, who is now a regional representative for Silent No More Campaign, an organization of women who have had abortions, urged the crowd to get pro-choice friends to visit the group’s website to hear the stories of women who have had abortions.

Other speakers included Lori Hoye, an African American activist whose mother became pregnant at 15 and whose sister had an abortion, and the Baptist preacher Rev. Clenard Childress who has spoken at seven of the eight Walks.

“You are the salt of the earth,” Childress told the Walk for Life crowd. “This is more than a pro-life movement. This is a holy spirit movement because the spirit addresses evil.”