By all accounts the 2nd Annual Walk for Life West Coast was another huge success! 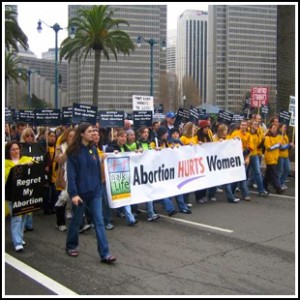 An estimated 15,000 participants turned out doubling last year’s inaugural event. Despite the “West Coast” moniker, folks came from as far as Alaska and Florida and from many states in between. Enthusiastic pro-lifers once again converged in San Francisco to publicly proclaim that abortion hurts women and that women—and all of us—deserve better than abortion!

Despite a misty morning, the weather cooperated by the time our Rally commenced. After an opening prayer by Bishop Wester, Fr. Fessio presented this year’s Gianna Molla Award for Pro-life Heroism to Jim Holman for all of his remarkable work, especially the Parent’s Right to Know initiative. After very moving and inspiring remarks by our guest speakers, the Walk began without incidence.

As expected however, the opposition was out in force again. Less than 500 folks, some dressed in bizarre costumes, lined the sidewalks. There was no counter-rally this year, thankfully preventing a repeat of our Mayor and the rest of City Hall officially working the pro-aborts into a frenzy. That is not to say that protesters present were any less vitriolic and offensive in their manner and message. This year there was a large group of “anarchist” who were dressed in black and had bandana’s covering their faces. Other than a myriad of unmentionable signs and slogans, by and large, the pro-aborts still cling to the coat hanger theme and insist that women will die if (when!) Roe is overturned.

It could have been a lot worse though. For weeks, the counter protesters had been meeting and posting on their website a battle call for “individual acts of civil disobedience” with the stated goal of completely shutting down our Walk (glad to know free speech, tolerance and diversity of opinion are alive and well in San Francisco!)

But a rousing three cheers goes out to San Francisco’s finest, our men in blue! With approximately 300 policemen on foot, motorcycle, paddy wagon, and even a helicopter, they were ready for anything. The verbal assaults were again constant, but with an on-foot and on-motorcycle buffer zone between us and them, we definitely felt protected. The police easily handled several attempt to impede the walk and even foiled a plot to bombard us with dozens of “balloon bombs” filled with a ketchup-water mixture.

Our parade mass stretched more than a mile long and the last pro-lifers descended into beautiful Marina Greens three hours later. The Info Faire was well attended and many families enjoyed picnics on the green belt. With the sun shining and a gorgeous view of the Golden Gate Bridge in the background, Bishop Wang officially closed the Walk with a prayer. To cap off the day, it was quite moving to see all of us spontaneously give a lengthy standing ovation to the police officers as they walked off the Marina Green. It truly was a great day for the pro-life movement.

There are many people/groups that have made the Walk for Life the huge sucess that it is. We would like to take the time to mention just a few:

Our Volunteers: We know that Walk for Life could not have been a success without all the efforts of a core group of people who really gave their all to the cause. We thank you from the bottom of our hearts!

EWTN: Life on the Rock A very special thanks goes out to Life on the Rock for all their hard work to get the word out about Walk for Life. Fr. Francis, Fr. Mark, Br. Leonard, Br. Peter, Br. Patrick and Amalia – you all are the best! Thanks so much for your support and friendship!

Sts. Peter and Paul: Thank you Father Malloy for allowing us again to have the Pre-Walk All-Night Adoration at beautiful SS Peter & Paul and for hosting youth groups in the Parish Hall. Special thanks also goes to parish secretary Gibbons Cooney for providing security all night long!

Little Sisters of the Poor: Thank you sisters for generously hosting over 100 students at St. Anne’s Home. Your understanding when the numbers tripled was heroic.

John Herreid: Thank you John for sharing your graphic design gift with Walk for Life. The posters and now the new calendar are great! And the time it must have taken to sift through hundreds of pictures to come up with the calendar!![/learn_more]