Saturday, January 22nd, 2005 was a historic day in San Francisco. 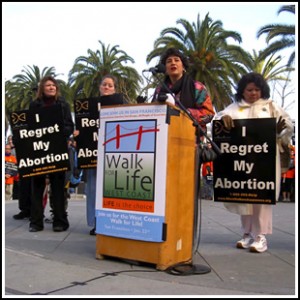 It was the first annual Walk for Life West Coast held in the heart of San Francisco. Over 7,000 pro-lifers showed up at the Justin Herman plaza to rally and let the world know that “Women Deserve Better than Abortion”. The fact that such a loud, clear and beautiful pro-life, pro-woman, pro-family Walk was being held in San Francisco, a typically liberal city, gave more punch to our message! The vibrations from our enthusiasm shook up city and motivated all involved in the Pro-Life Movement.

After hearing dynamic speakers in the Justin Herman Plaza where the excitement was tangible, the 7,000 plus pro-lifers walked peacefully and prayerfully through the scenic Embarcadero, down through Pier 39 and to the Marina Greens.