Today’s National Observer, an online publication out of Canada, featured an article on abortion in the United States. The author is Massoud Hayoun. Mr. Hayoun asked for commentary from the Walk for Life West Coast, and we supplied it. But we always expect biased coverage from the mainstream media and we are always prepared!

In addition to us, Mr. Hayoun interveiewed pro-abortionists Laura Woods and Sunsara Taylor from “Stop the Patriarchy”–a group aligned with the Revolutionary Communist Party. Not only that, but as readers of the article will note, he gave far more space to them than he did to Walk spokeswoman Rose Trabbic despite the fact that every year we outnumber the Stop Patriarchy group protesting the Walk by at least 500 to 1.

It’s not us saying that, by the way, but is the number reported by the famous and ‘pro-choice’ San Francisco photojournalist Zombie in his coverage of the 2010 Walk. And of course our numbers have only grown since then. Whereas below are Stop Patriarchy’s numbers last week, as they had a preparatory anti-Walk for Life West Coast Rally in front of San Francisco’s City Hall. That’s it, in its entirety,  about 40 minutes into their event. Click the photo for a larger version, if you so desire. 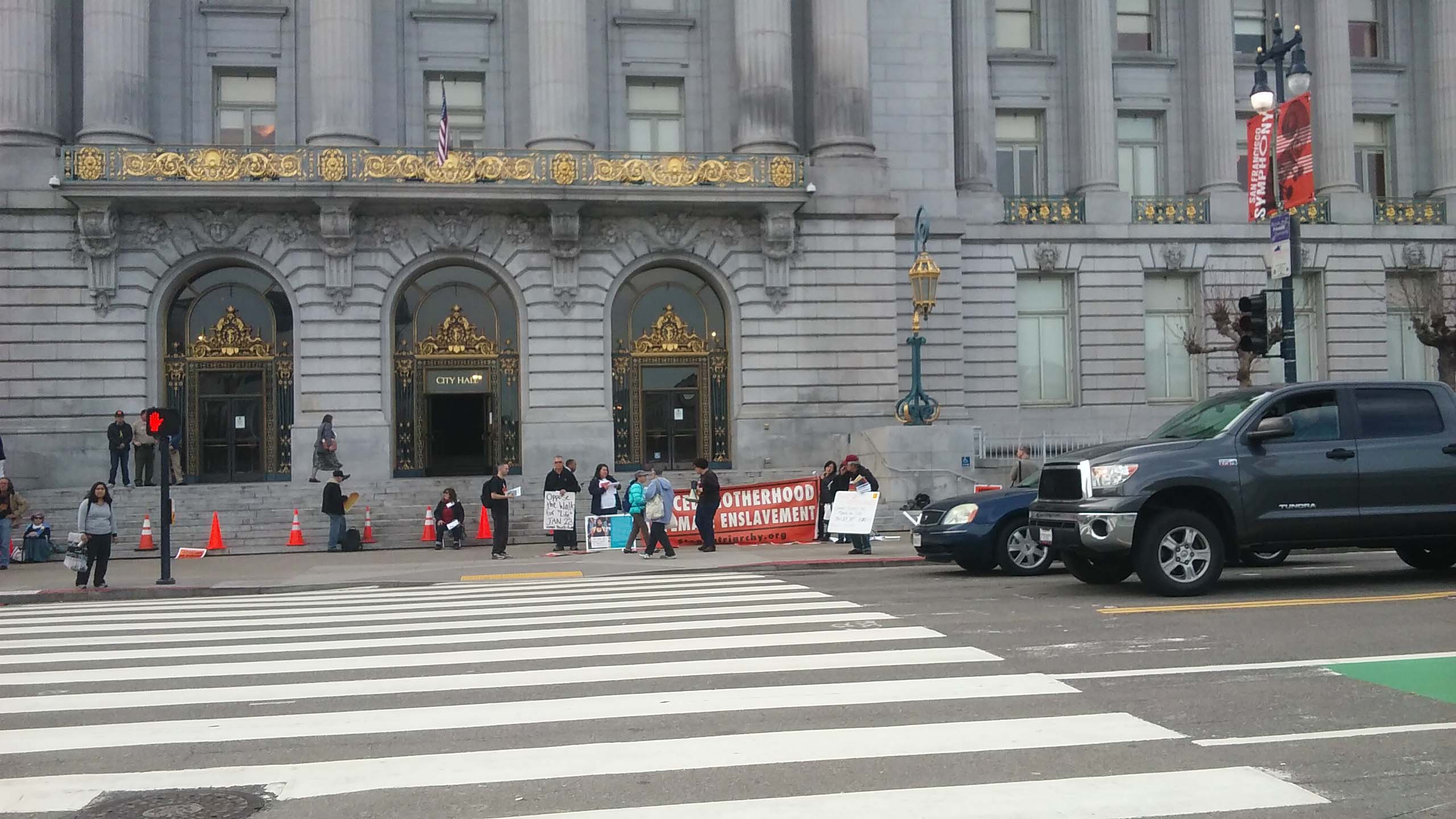 Not only that, Mr. Hayoun chose not to print his fourth question, and our answer, because it was such a smackdown of a pro-abortion calumny:

Us: It’s nonsense. Over the past 11 years we have had, cumulatively, 350,000-400,000 pro-lifers at the Walk for Life West Coast. In all those years, with all those people, the only arrests the San Francisco Police Department have ever made has been of members of our ‘pro-choice’ opposition.

So we ask Mr. Hayoun: Since the Communist Party in its various national branches, has been directly responsible for the deaths of between 85 and 100 million people in the last century, and since you were interviewing Sunsara Taylor of Stop Patriarchy, who “takes as her foundation the new synthesis on revolution and communism developed by Bob Avakian” why didn’t you ask her a similar, and actually justified question:

While we wait for Mr. Hayoun’s answer (and we suggest you find a comfortable chair) here, for the record, are his questions and our answers, which readers can compare to the article linked above.

Hayoun: How long have you been doing the March for Life?

Us: The Walk for Life West Coast was founded in San Francisco in 2005. January 23 will mark our 12th Annual Walk.

Hayoun: At the last presidential debates (the Democratic debate Sunday), no one mentioned abortion. Why do you think that is?

Us: It was not mentioned in the debate because no debate on the abortion issue is allowed within the power structure of the Democratic party.

Hayoun: Do you anticipate that abortion will become a decisive issue for American voters in November? Why or why not?

Us: It is always decisive for a significant segment of voters, who will never vote for a ‘pro-choice’ or ‘pro-life’ candidate, depending on where they stand on the issue. If your question means “decisive enough to swing the election” that depends on what other issues are at the forefront.

Us: It’s nonsense. Over the past 11 years we have had, cumulatively, 350,000-400,000 pro-lifers at the Walk for Life West Coast. In all those years, with all those people, the only arrests the San Francisco Police Department have ever made has been of members of our pro-choice opposition.

Hayoun: How many people do you anticipate will participate in your events across the country? What do you aim to do?

Us: Tens of thousands in San Francisco, hundreds of thousands in Washington DC. Our aims are in our mission statement: “Founded in 2005 by a group of San Francisco Bay Area residents, the Walk for Life West Coast’s mission is to change the perceptions of a society that thinks abortion is an answer.”

Hayoun: Anything else you want (mostly Canadian) readers to know?

Us: The Walk for Life West Coast is for all people of good will who support the unborn person’s  right to life. It’s also a chance for people to meet actual pro-lifers, who are real people, not media stereotypes. We include Catholics, Orthodox, Anglicans, Lutherans, Protestants, Buddhists, Jews, Secularists, Goths, and people of all ages and races. Our largest demographic are young, hopeful people. We have seen banners from Canada in the crowd in years past, and we invite Canadians of any and all persuasions to join us on January 23. It will do your hearts good!