“Starting in 2005, with 7,500 participants the Walk has grown in both attendance and diversity each year, until it is now the second largest pro-life event in the United States. Last year’s attendance was estimated as high as 50,000 people and more people showed up yesterday.

The Walk has grown despite ongoing opposition from San Francisco’s city government. That opposition began with the first Walk in 2005 and continues to this day. On January 18, 2014, Supervisor David Campos, joined by six of his colleagues, introduced a resolution opposing the banners inviting San Franciscan’s to the Walk. The banners proclaimed the Walk’s message: ‘Abortion Hurts Women.’”

Life News also has good pictures. Here’s Monica Snyder, of Secular Pro-Life, who was one of our speakers this year. 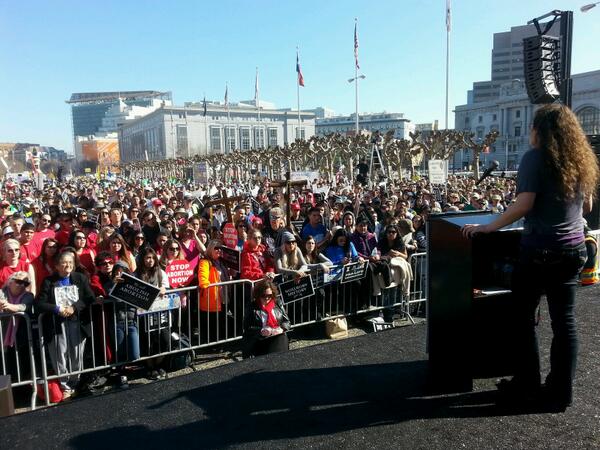 Monica had one of the best observations of the day: “This is a debate about life and death. When you peel away the glossy wrappers, the pro-choice movement is about death.”