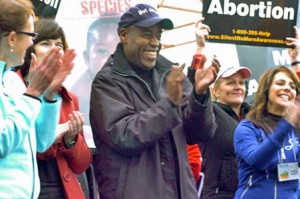 Pastor Hoye at the 2008 Walk for Life West Coast

Pastor Walter Hoye is the African-American pro-life hero who spent 28 days in Santa Rita jail for the “crime” of passing out literature and speaking to people—a conviction which was later overturned. The Life Legal Defense Fund has filed an amicus brief on behalf of Pastor Hoye in McCullen v. Coakley, challenging the constitutionality of such laws. In June, the Supreme Court announced it will hear the case.

On his Issues4Life website, Pastor Hoye has posted a series of essays on the historical fight for personhood among African-Americans. The essays demonstrate why the issue of “personhood” resonates so deeply in that community, and why they are among the leaders in the push for a “Personhood Amendment” for the unborn.

This week’s issue is about Elizabeth Freeman, better known as “Mum Bett.”

To summarize Pastor Hoye’s essay: “Elizabeth was born to enslaved parents (native Africans) around 1742 at the farm of Pieter Hogeboom in Claverack, New York. When Hannah (Hogeboom’s daughter) married Colonel John Ashley of Sheffield, Massachusetts, she was sold as a young teenager, along with her sister, to the newlyweds. On the Sheffield plantation Elizabeth was married, given the name “Bett” and her daughter was given the name Little Bett…”

Colonel Ashley was a Yale University educated lawyer and a community leader. At the time of the revolution, his house was the site of political discussions and is considered the probable location of the signing of the “Sheffield Resolves,” which predates the Declaration of Independence and which includes the line “Mankind in a state of nature are equal, free, and independent of each other, and have a right to the undisturbed enjoyment of their lives, their liberty and property.” Mum Bett must have heard the Resolves read at the house, and probably the Massachusetts Constitution and the Declaration as well, because when she “…asked for the counsel of a young abolition-minded lawyer named Theodore Sedgwick  to help her use the law to sue for freedom”  she told Sedgewick “I heard that paper read yesterday, that says, all men are created equal, and that every man has a right to freedom. I’m not a dumb critter; won’t the law give me my freedom?”

Sedgwick accepted her case and that of Brom, another of Colonel Ashley’s slaves, and asked the help of Tapping Reeve, the founder of one of America’s first law schools. “When the case of Brom and Bett vs. Ashley was heard before the County Court of Common Pleas in Great Barrington, Massachusetts, Sedgwick and Reeve argued that the constitutional provision that ‘all men are born free and equal’ nullified the slave system in the state.” In August of 1871, the jury ruled in Bett and Brom’s favor. They were awarded compensation, and Bett became the first Black American woman to be recognized as a legal person and set free under the Massachusetts State Constitution.

Pastor Hoye closes the essay with An Open Letter to the Church:  “The fight for personhood is found everywhere in Black American history. Personhood strikes a chord that runs deep in the experiences of Black Americans. The wholly heartfelt desire for Personhood strikes a chord that rings so true and runs so deep in my people that it can even be found in the souls of those who have been violently subjected to slavery since the American Colony of Virginia’s “Hereditary Slave Law” of 1661. The reality is Personhood resonates in the heart, registers in the mind, generates soul searching conversation and has the power to reconcile the very strained relationship between the Pro-Life movement and communities of color. In Black America, Personhood speaks to the need to have the words ‘we hold these truths to be self-evident, that all men are created equal, that they are endowed by their creator with certain unalienable rights, that among these are Life, Liberty and the pursuit of Happiness’ apply to all human life and not just some human life.”

“Today, Alveda King, daughter of A.D. King and niece of Dr. Martin Luther King, Jr. says: ‘The cause of personhood is the final chapter of the civil rights movement.  And each person who’s spared because of it will receive a priceless gift — the chance to write the chapters of his or her own life story.’ Certainly, Bett received this gift from her freedom suit and wrote the last chapters of her life as a free woman. While Bett’s real age is not known, her tombstone estimates that she died at the age of eight-five (85). As such, in December of 1829 Elizabeth Freeman (Mum Bett) was buried in the Sedgwick family plot in Stockbridge, Massachusetts. Her tombstone inscription reads as follows:

‘ELIZABETH FREEMAN, known by the name of MUMBET died Dec. 28th 1829. Her supposed age was 85 Years. She was born a slave and remained a slave for nearly thirty years; She could neither read nor write, yet in her own sphere she had no superior or equal. She neither wasted time nor property. She never violated a trust, nor failed to perform a duty. In every situation of domestic trial, she was the most efficient helper and the tenderest friend. Good mother, farewell.’”

The “Freedom Suit” essays can be read at http://www.issues4life.org/newsletters.html and by subscribing to Pastor Hoye’s email blast.