The full Board of Supervisors voted on Supervisor David Campos resolution condemning the Walk for Life West Coast ‘Abortion Hurts Women’ banners yesterday. This piece in Catholic World Report, was posted before the vote. 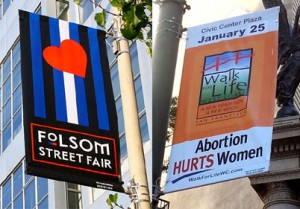 On December 26, the Walk for Life West Coast, working through the city’s Department of Public Works, had 50 banners placed on lampposts on San Francisco’s Market Street. The banners were in preparation for the January 25 Walk for Life West Coast, the second-largest pro-life event in the country and one of the largest annual events to be held in San Francisco. The banners met all requirements and proclaimed the Walk’s contention: “Abortion HurtsWomen.” Not everyone was happy. On December 31, the San Francisco Chronicle reported that Ellen Shaffer of the Silver Ribbon Committee, a pro-abortion group, had demanded that Mayor Ed Lee have the banners removed. Mayor Lee’s spokesman Francis Tang responded, “Mayor Lee is a staunch, longtime defender of a woman’s right to choose and disagrees strongly with the message of the banners, but the mayor’s disapproval obviously doesn’t and shouldn’t trump the First Amendment of the U.S. Constitution.”

Would that the San Francisco Board of Supervisors could understand such a simple principle of civic responsibility. On January 14, in the latest seemingly willful effort to make themselves ridiculous, Supervisor David Campos, joined by six of his colleagues, jumped on Ms. Shaffer’s bandwagon, and introduced a resolution opposing the banners. The Chronicle reporter covering the resolution expressed appropriate skepticism: “While the resolution may have many San Franciscans nodding in agreement, it’s seems unlikely that city has any legal right to refuse to post something simply because politicians don’t like the message….”