On June 20, Walk for Life West Coast co-chairs Dolores Meehan and Eva Muntean were honored by the Knights of Malta! California Catholic Daily has the story: 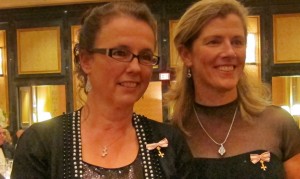 On Thursday, June 19 and Friday, June 20, 2014, the Western Association of the Knights of Malta held their annual conference and investiture in San Francisco. The events began on the morning of Thursday, June 19, with a Presidents/Board meeting, followed by a conference with the theme “Defense of the Faith and Nurturing the Faith,” which was in turn followed by an Investiture Vigil at San Francisco’s historic Mission Dolores Church. On Friday, June 20, the day began with a members meeting, followed by a discussion of Knights’ “Parish Nurse” program. The Investiture of the new Knights was celebrated with a mass at St. Ignatius Church. The final event, the Knight’s Investiture Dinner Dance, was held in the Grand Ballroom of San Francisco’s St. Francis Hotel.

The white-tie event was attended by Knights adorned with decorations recalling the 900-plus year history of the order, and they were joined by many clergy, including Archbishop Salvatore Cordileone of San Francisco and Bishop Michael Barber of Oakland. Prior to dinner the Knights honored those who have shown special dedication in “bring(ing) the gospel to those most in need of its message of the beauty and dignity of all human life.” Two of the three honorees were the co-chairs and co-founders of San Francisco’s Walk for Life West Coast, Dolores Meehan and Eva Muntean.

“The tenth Walk for Life West Coast took place on January 25th of this year.  Many in this room will remember the strong public reaction which greeted the first Walk for Life West Coast in 2005.  Many men and women were excited about the opportunity to support the Walk’s goals, to make a statement about life and to reach out to the many women who have had abortions, and all those touched by abortion, especially in a city in which there were at that time more abortions than live births.  The opponents were, well they were just stunned that anyone would even attempt a pro-life public event in this bastion of the pro-abortion culture.  But Ms Meehan and Ms Muntean had more dedication and courage than their opponents anticipated, and despite personal threats and public outcry that such a walk should not be allowed in San Francisco the walk took place and its peace-filled non-political message brought out thousands of participants.  In ten years the walk has grown to tens of thousands of participants, and it remains joyful and entirely peaceful, this year walking below large banners supporting the pro-life message lining both sides of Market Street, while its opponents continue to shrink in number and virulence.  Members of the Western Association of Our Order have participated in the walk every year since its founding, carrying a banner with the Order’s Cross.

Ms Meehan and Ms Muntean provide a stunning example of the difference two people can make and perfect examples of the way in which lay persons can fulfill our vocation to sanctify the world.  The Sovereign Council of the Order has conferred on Ms Meehan and Ms Muntean the Cross of Merit with Crown to recognize their courage and dedication to bring the gospel to those most in need of its message of the beauty and dignity of all human life, and its message that healing and reconciliation are always possible for all those who have suffered the effects of abortion.  Our congratulations to you both.”