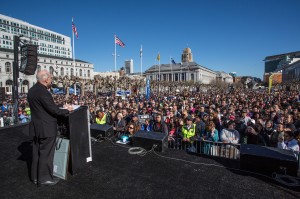 SAN FRANCISCO — For the first time ever, the apostolic nuncio to the United States joined the lineup of Catholic and pro-life leaders at the annual Walk for Life West Coast, which this year marked the 40th anniversary of Roe v. Wade in San Francisco.

At the rally preceding the Jan. 26 walk, Archbishop Carlo Maria Viganò, named the Pope’s personal representative to the U.S. in October 2011, read Pope Benedict XVI’s blessing to the crowd of 50,000 pro-lifers gathered at the city’s Civic Center Plaza. Then, the nuncio told his enthusiastic audience, “I feel with you that you are the best of the United States of America.”

Archbishop Viganò’s appearance at the walk prompted an expression of gratitude from San Francisco’s newly installed Archbishop Salvatore Cordileone. The nuncio told the Register that he has sought out opportunities to familiarize himself with the Church in the United States.

“One of the duties of the mission of the apostolic nuncio and his staff is to provide and offer [information] to the Pope about the situation of the Church in the United States and to present to him suitable candidates to be bishops,” Archbishop Viganò said.

“This is a very important responsibility, and, since the country is so large, I try to be present at any occasion or for an important meeting.”