Today the United States Conference of Catholic Bishops elected their new President. He is Archbishop Joseph Kurtz of Louisville. Of course, ALL Catholic Bishops are against abortion, but some are more outspoken than others. Archbishop Kurtz is one of these. He is on the board of directors of the National Catholic Bioethics Center and he previously served as chair of the U.S. bishops’ Ad Hoc Committee for the Defense of Marriage and Family Life. He is also the author of the prayer “The Blessing of the Child in the Womb,” which has been adopted by the Vatican.

Here’s part of a 2007 article from the Criterion, the newspaper of the Archdiocese of Indianapolis: 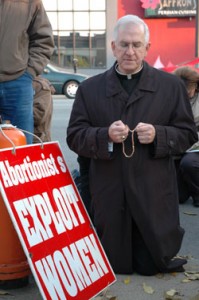 Recently installed Archbishop Joseph E. Kurtz of Louisville held rosary beads and knelt on the sidewalk in front of the E.M.W. Women’s Surgical Center, a downtown abortion facility, on Nov. 10 to pray with about 300 pro-life supporters from Kentucky and southern Indiana in the hope of changing women’s minds and saving the lives of unborn babies.

Archbishop Kurtz said after the rosary that he delayed his flight to Baltimore for the U.S. bishops’ fall general meeting until Nov. 11 so he could pray outside the abortion clinic for the first time.

“I came obviously in prayer and in a manner that embraces both truth and compassion,” Archbishop Kurtz said. “I was honored to be able to join with others who have a deep respect for human life and who expressed it in prayer and in great civility.

“I also join with those who are reaching out in compassion to those in need,” he said, “and who really need not only our prayers but [also] prayers that lead us to an action that helps them welcome the gift of human life, and helps them overcome the barriers that would cause them to turn away from the sanctity for human life.”