Last year, both the Walk for Life West Coast and the March for Life in Washington D.C. were blessed to have the opening Invocations given by members of the Orthodox Christian clergy. (Ours was a beautiful and holy and compassionate one by His Eminence the Most Reverend Benjamin, Archbishop of San Francisco and the West of the Orthodox Church of America.)

That is the first time Orthodox clergy gave the invocation on both coasts! Our  friends over at Orthodox Christians for Life sent us this information about the important contribution of Archpriest John Kowalczyk. 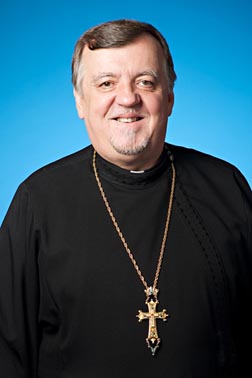 Archpriest John Kowalczyk has relentlessly sought to defend the unborn in articles, lectures, academic work and in participation in the March for Life. Other highlights of his pro-life ministry were meeting Mother Theresa and working closely with Nellie Gray, the founder of the March for Life. Father John’s sanctity of life work began before he first attended the March for Life. He was encouraged to attend by the founders of Orthodox Christians for Life in New York and a fellow member of Pennsylvanians for Human Life. 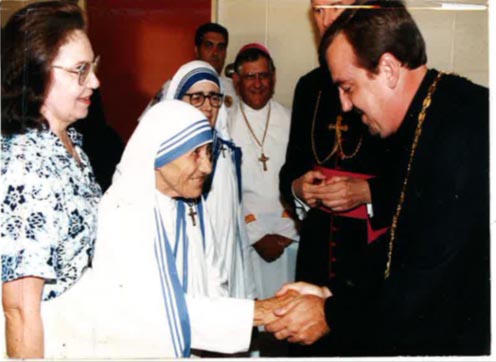 The first year Father John attended the March for Life was 1987 which was memorable for a tremendous blizzard that reduced the typical 200,000 participants down to only an approximate 30,000. Because of the storm, Father John, along with Metropolitan Herman, Former Archbishop of Washington and New York, Metropolitan of All America and Canada (OCA), were the only two religious leaders present. Father John was asked to give the Invocation and Bishop Herman spoke, the first Orthodox hierarch to address such a gathering.

Father John received an icon of the greeting of Mary and Elizabeth (Luke 1:39-45) from an Orthodox iconographer who was inspired by the Orthodox presence at the March for Life. As a result, thousands of copies of the icon have been reprinted, re-envisioned and distributed.

Father John’s words about the March for Life also apply to the West Coast Walk for Life. What is the purpose? “To become a visible presence.” Attending the March for Life is bearing witness to the Orthodox position on the tragedy of abortion. The March is not meant to be rancorous, but peaceful. “Let us depart in peace,” the priest says at the end of the Divine Liturgy. The March is a continuation of the Liturgy, Fr. John stressed. We carry that peace into the world, that we may bear witness to God’s love for every single precious human – those who have been aborted, and those who have aborted.

To quote Father John, “In the Incarnation, Christ gave value and dignity to every human being. It’s been my passion as a priest – the sanctity of life – because Christ came into the world to give us life, to give us eternal life, and He became one of us, that we may love one another.”

Father John insists that “No one person can take ownership of [the growth of] this movement . . . All priests should be involved in some way.” However, it is clear that Father John’s steps have been “guided aright by the Lord” (Psalm 37:23) and that he has been instrumental in opening up the pro-life movement to Orthodox Christians.

Thank you, Archpriest John Kowalczyk, for your work and for the encouragement to be a visible presence of Orthodox Christian teaching which honors God’s gift of life with compassion for those affected by abortion and those in need of assistance to make the choice for life.”

Credits: icon from oclife.org; portrait of Father John from the OCA Clergy Directory.