Oakland’s wonderful young Bishop Michael Barber posts his reflections on the Walk for Life West Coast over at his blog. His Excellency also attended the Reverend Walter Hoye’s Stand Up4 Life March and Conversations 4Life Dinner in Oakland on January 23, and he talks about that, too. Here’s his thoughts on the Walk:

After Mass I walked down to the SFO Civic Center for the Rally.  What most impressed me were the quality of the speakers: women who spoke of the effect of having an abortion; another young woman who took the RU486 pill to try to end her pregnancy, then changed her mind and discovered doctors had found a new medicine to reverse the abortion pill.  She held up her curly-haired year-old baby boy in thanksgiving to God for the gift of life.  I was impressed by the age of the group.  KCBS put the attendance at 50,000 marchers.  CNN said “many thousands”.  The group was primarily YOUNG PEOPLE.  The future belongs to the young. And the young believe in life. Thanks be to God.

How blessed we are by the Bishops we have here in the Bay Area! Here’s his Excellency with Mia, the pro-life wonderdog (and there’s Walk speaker Rebekah Buell and her son Zechariah in the background): 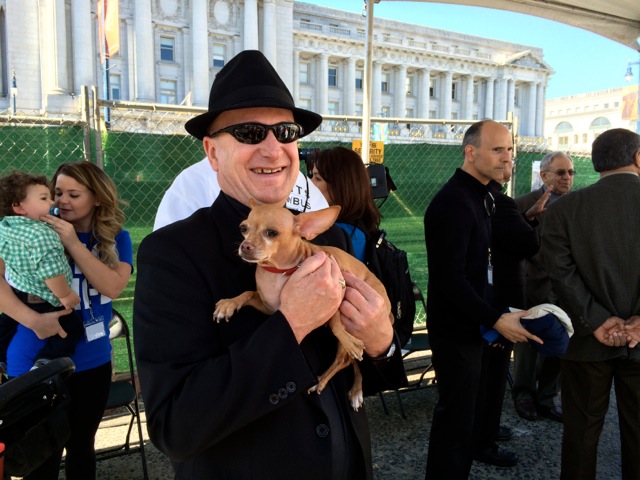