From this morning’s California Catholic Daily:

“Growing on the Streets of San Francisco”
Planned Parenthood gone, but city’s pro-life march larger than ever
By Gibbons J. Cooney
On Saturday, Jan. 22, 2011, the seventh annual Walk for Life West Coast will take place in San Francisco. The Walk was founded in 2005 by a group led by two San Francisco women, Dolores Meehan and Eva Muntean. The event quickly became the largest annual gathering of Catholics in San Francisco and perhaps on the West Coast. The 2010 Walk drew an estimated 35,000 to 40,000 pro-life marchers, led by eight Catholic bishops. 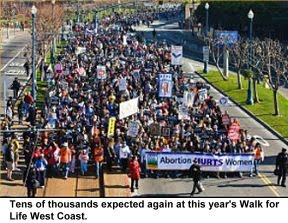 The same spirit that attracted the presence of Catholic bishops and pro-life heroes also attracted significant opposition from the San Francisco establishment. Prior to the first Walk in 2005, the San Francisco Board of Supervisors issued Resolution 050019, which recognized “January 22, 2005 as ‘Stand Up For Choice Day.’ The resolution went further. It supported “…the local Pro-Choice community demonstrating in San Francisco,” which, in practice, meant supporting those who attempted to block the pro-life walk from taking place.

The resolution passed unanimously. The supervisors were joined by the then-president of Planned Parenthood Golden Gate, Dian Harrison, who said, “We couldn’t believe that they had the nerve to come to San Francisco. They’ve been so emboldened that they believe that their message would be tolerated here. Sure, they can come here, but San Francisco will be ready to show them that they don’t believe in their message.”

Harrison’s prediction has proved false. Six years later the Walk for Life West Coast is larger than ever, while Planned Parenthood no longer has a franchise in San Francisco. Harrison, who was fired in the midst of a financial scandal at the organization, is currently embroiled in a lawsuit with her former employers.

Kelly Connelly, a co-founder and member of the Walk’s planning committee, told California Catholic Daily, “We started with the Marriage Rally at Sts. Peter and Paul… the idea of the Walk for Life came about at one of our planning meetings to bring the idea of how abortion does such damage to women. San Francisco was becoming a place of radical legislation and social exploitation. Most of us live here in San Francisco, and we did not like what our politicians were doing to our city. Why not have a public walk to show Gavin Newsom and other anti-life and anti-family leaders that there is a huge number of locals who fiercely disagree with what they are doing? We decided to have a Walk for Life to speak for women and others who are hurt by the choice of abortion. We had no idea that so many would show up, not only from San Francisco, but from all over the state and the West Coast…”

“It is gratifying to see the work of parish and church leaders, pastors, bishops, youth group leaders, high school groups, clubs, religious organizations and individuals of all ethnicities — all working for many months to get their people to San Francisco,” Connelly continued. “We are grateful to them. They are why we are growing each year on the streets of San Francisco.”

Asked what pleased her most about last year’s Walk, co-founder Eva Muntean said it was the presence of so many young people. “If you had told me five years ago that there would be a professional hip-hop video celebrating women who refuse the ‘choice’ of abortion, and that it was going to be filmed at the Walk for Life, I would have said you were crazy,” she said. “And five years ago, if you had told me we would have 35,000 pro-lifers walking in San Francisco, I would have said you were crazy too! Now I look out at the thousands of young people who eagerly listen to our message every year and I see real and concrete hope for the future of our country.”

The Walk for Life West Coast begins at 11 a.m. with a rally, and the Walk itself begins at noon, at Justin Herman Plaza. The Walk will be followed by a Youth Rally at Fort Mason