Today’s CNA has an article about the SF Supervisors resolution celebrating Roe v. Wade on Walk for Life Saturday: 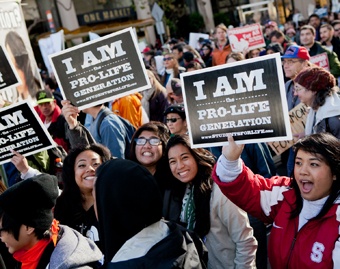 an Francisco, Calif., Dec 14, 2012 / 02:02 am (CNA).- A move by San Francisco’s city officials to support a celebration of the 40th anniversary of legalized abortion in the U.S. has been interpreted by some as an attempt to discourage a local pro-life rally.

“San Francisco City government, as well as many local residents, cannot abide the fact that the Walk for Life can attract over 40,000 participants annually to oppose a cause that their worldview holds as gospel,” said Vicki Evans, Respect Life coordinator for the San Francisco archdiocese.

Despite low attendance of a similar abortion advocacy event last year, San Francisco Supervisors Malia Cohen and David Campos introduced a resolution to the city’s Board of Supervisors to support the “Celebration of Women, Life and Liberty” event on Jan. 26, 2013.

The event, which aims to commemorate the Supreme Court ruling of Roe v. Wade four decades ago, was approved in a resolution which passed 10-0 on Dec. 12.

In a Dec. 12 interview with CNA, Evans pointed out that the actual anniversary of the Supreme Court ruling that legalized abortion in the U.S. is Jan. 22.

However, she said, organizers of the pro-abortion rally chose Jan. 26 because it falls on the same day as the increasingly popular Walk for Life West Coast, a rally dedicated to changing “the perceptions of a society that thinks abortion is an answer.”

Since its beginning in 2005 the interdenominational pro-life event has grown substantially each year from its first crowd of roughly 5,000 participants, but it has also consistently been met with opposition from city officials.

“Since day one of the Walk for Life in 2005, the City’s pro-abortion forces backed by the San Francisco Mayor, Attorney General and Board of Supervisors have attempted to discourage us,” Evans said.

In spite of this opposition, “they had little success against us,” she said. “Our numbers grew, theirs dwindled.”

The event that gained the support of city officials will take place immediately before the Walk for Life West Coast and will use the same location that the pro-life march has used as its ending point in the past.

“To ignore the pain of millions of women and their dead babies who commiserate 40 years of abortions under the yoke of Roe v. Wade is an admission by the Supervisors that they devalue women who don’t count in their books,” Dr. Alveda King, niece of Dr. Martin Luther King and a speaker at the 2008 Walk for Life West Coast, said in a Dec. 12 statement.

“Their sense of injustice is a threat to justice everywhere,” Dr. King added.

Speakers for the 2013 rally include Lacey Buchanan, a mother whose video about herself and her blind son encouraging people not to choose abortion has drawn over 11 million viewers on YouTube; Elaine Riddick, who was forcibly sterilized at age 14 at the orders of North Carolina’s Eugenics Board; and Rev. Clenard Childress, the founder of the BlackGenocide.org website.