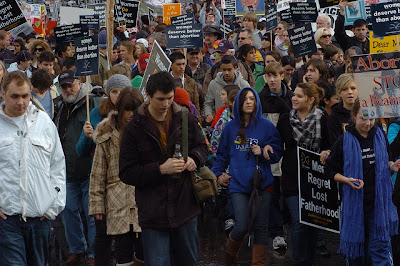 San Francisco’s 8th Annual Walk for Life West Coast on Jan. 21 should be the largest yet. It has certainly attracted the largest number of Catholic bishops ever.

Underscoring the ecumenical nature of the Walk for Life, this year’s invocation will be given by Fr. Aris P. Metrakos, proto-presbyter of San Francisco’s Holy Trinity Greek Orthodox Church. “I was greatly humbled and honored to receive this invitation,” he said. “I have the greatest admiration and respect for all those who have been on the front lines of this life-or-death struggle to turn our culture away from its indiscriminate march toward moral oblivion. I regard this prayer as not some sort of a perfunctory beginning to a civic gathering, but a recognition that this unimaginable evil can only be overcome by the grace of God.”

Fr. Metrakos argues that the destruction caused by the legalization of abortion has now penetrated every part of society: “Abortion-on-demand has shredded the moral fabric of our society by encouraging promiscuity, obliterating the notion of personal responsibility and accountability, and making selfishness a legal right. It tears asunder literally the bodies of the unborn and metaphorically the hearts and souls of the women who submit themselves to this heinous barbarism. It makes a mockery of men’s honor and the medical profession’s nobility, while exposing the duplicity and opportunism of the majority of the political class.”

“I believe that abortion has erased the value of human life,” said Dr. Wong. “We have created language, philosophy and institutions that legitimize ending the lives of unborn babies without reflection on what we are doing… Where will the killing stop? We have an assault on babies with birth defects, whose lives are not valued and ended indiscriminately. Will this affect people who have been born who have any type of condition considered a disability? Will the next group targeted be those at the other end of the spectrum of life, those with any form of dementia? When we do not value life in the womb, it is logical to anticipate that we, as a society will not value life outside of the womb.”

Ms. Stalnaker of the Silent No More Awareness Campaign and the victim of a coerced abortion, said: “I want to deliver the message of hope and healing to those who grieve the loss of parenthood, to be a voice for the voiceless. So many believe the pro-life movement is only about saving babies… women and men of lost parenthood often walk around for 20 years wounded from the trauma of abortion — they need to know their is hope, forgiveness and healing!”

“Abortion has victimized women and decimated the African American community,” said Rev. Childress, a Baptist minister and regular at the Walk for Life West Coast. “All other travesties pale in comparison. It has corrupted the conscience of the country and diminished the value of life in this present generation.

The Walk for Life West Coast is truly the most invigorating event for me… from the beginning Eva (Muntean) and Dolores (Meehan) depicted an earnest desire to testify in the public square on the behalf of those whose voices are silenced before birth. Their desire has connected with other like-hearted individuals who see the need to join them, and their message is spreading.”