How blessed we are! Our pro-life brothers and sisters from all over the world come to join us! The pro-life movement presupposes the brotherhood of all men and all women. It is international. From the Culture of Life Africa blog:

Witnessing and Walking for Life in San Francisco

On Friday evening our wonderful Culture of Life Africa coordinators Claire and Lisa arrived San Francisco as thousands of other passionate pro-life people poured into the city for the Walk for Life which was scheduled for Saturday 25th January.

They were privileged to attend the Issues for Life Dinner where they met many great pro-life advocates and activists including personal and dear friend – Janet Morana Executive Director of Priests for Life.

The following day ushered in the Walk for Life with throngs of pro-lifers gathering to witness in the most resounding way to life.

Banners (including our Culture of Life Africa banner) were raised through the streets of the city by the peaceful people of life. 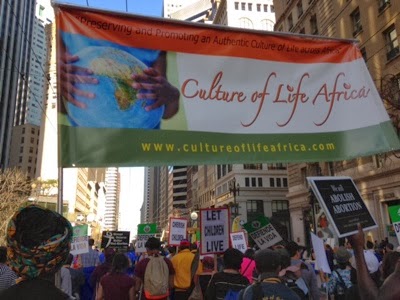 In a nation that has laws (since 1973) that make it possible for abortionists to kill more than a million unborn babies per year, pro-life people have chosen this day to raise their hearts and tears to lament this sanctioned violence that is now spreading throughout the world – like toxic fumes…”