Dexter Duggan, of The Wanderer, reported on the Students For Life West Coast Conference when he was in San Francisco covering the Walk for Life West Coast. Way to go, Dexter! Here are some excerpts: 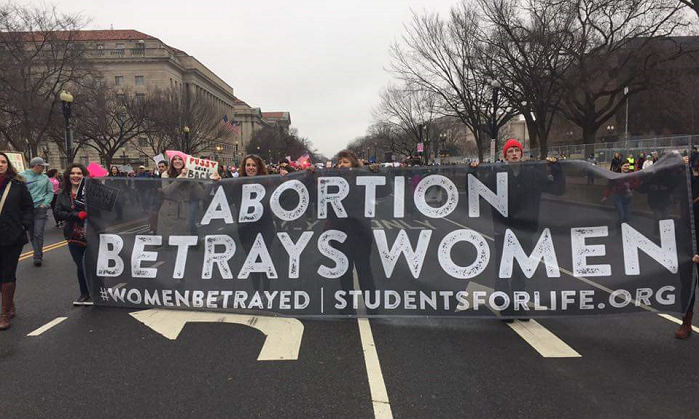 Students For Life, temporarily at the front of the Washington D.C. “Women’s” March.

“The Virginia-based Students for Life of America (SFLA) holds an annual conference on each coast the day after a major pro-life march occurs there — the Walk for Life West Coast in San Francisco and the March for Life in Washington, D.C.

Coincidentally, both those cities had large “women’s marches” on January 21.

Tina Whittington, SFLA executive vice president, told The Wanderer that she was at the anti-Trump protest in the nation’s capital on January 21 before flying here for the SFLA conference the next day.

SFLA wanted to bring the truth to as many people as possible at the D.C. protest, she said, and actually managed to jump out in front of that march to lead it with three banners before they were attacked, harassed, and spat at and their signage mistreated. Two banners said “Abortion Betrays Women” and one said “We Don’t Need Planned Parenthood.”

The studentsforlife.org website carried a story posted January 22 about this, “Not welcome but we came anyway.”

The story reported, “It was brutal and disheartening but we stayed. We were able to have civil conversations with some participants of the march.”

Whittington told The Wanderer there was much yelling saying, “My body, my choice.”

When The Wanderer replied that the baby being aborted is a different person’s body, Whittington said, “They have to believe those (ideas) because they have a certain lifestyle they want to keep. . . . In order to live that way, they have to be okay with abortion.”

Both hats and word choices at the march were offensive, she said.

As for comments made from the stage, “It was so vulgar…basically reducing us to one sexual organ. I know I’m more than that,” she said.

The march sported a theme of “inclusivity and tolerance, but that wasn’t our experience,” Whittington said.

Indeed, marchers were expected to accept the pro-abortion mindset.

The SFLA San Francisco conference had about 500 students attending, while 1,500 were expected for the January 28 conference after Washington’s March for Life, SFLA president Kristan Hawkins said. The organization has 1,171 chapters.

The one-day West Coast conference included presentations on “How to win people to our movement: What makes us equal?,” “Knowing your rights on campus,” “Heroes journey: Answering the call to adventure,” “How to speak heroically about abortion,” “Helping moms be heroes,” “Theology of the body,” and “Reaching your peers.”

Hawkins, mimicking Trump’s New York pronunciation of “huge,” drew laughter when she told the conference, “We actually have a yuge opportunity right now” with the beginning of the Trump administration.

Trump’s vice president, Mike Pence, “was trying to defund Planned Parenthood before it was cool,” she said.

Earlier in her morning remarks, Hawkins said, “Those who have stood with us, their lives have been transformed” by living for others. “. . . Abortion is the greatest human-rights violation the world has ever known. . . .

“We know where our victory is, and we’re working toward it,” she added.

“Our generation has an advantage” that previous ones lacked, she said. “We have advantages because science is on our side” — including educational technology like ultrasound.  Some truths have to be told even if they’re considered difficult, she said, such as saying Planned Parenthood sells baby body parts and violates the law.

“This is not mean” to say this. “You can’t be afraid to say what it is you are against,” she said, although there are “strategic” ways to go about expressing a message.