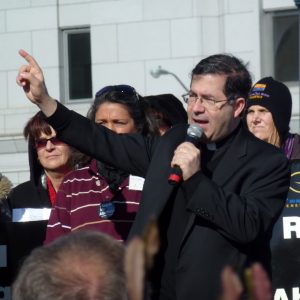 Fr. Pavone at the annual Silent No More rally, preceding the Walk.

There are few people, clerical or lay, who have shown more unswerving dedication to the defense of the unborn than Fr. Frank Pavone. Fr. Pavone was ordained in 1988 by Cardinal John O’Connor, and in 1993 the Cardinal named him National Director of Priests for Life. As a wonderful side note, Priests for Life was established right here in San Francisco in 1991!

Once again this year, Fr. Frank will be joining us at the Walk for Life West Coast. He graciously took a little time out from his very busy schedule to speak with us.

Fr. Frank, When did you first attend the Walk?

I first attended the Walk in 2007, its third year, and it has been a priority item on my calendar ever since.

Of course you also attend the March for Life in Washington pretty much every year. What similarities/differences do you see between the March in DC and the Walk in San Francisco?

The similarities between the March for Life and the Walk for Life are based, first of all, in the fact that these are events that respond to the tragedy unleashed in our nation by the legalization of abortion on January 22, 1973. They are events “for life,” but are not diluted by the idea that prolife events should focus on a wide range of issues. Special rallies, walks and marches are inspired and shaped by particular, specific problems, and both of these events focus on the particular problem that the lives of children in the womb are no longer protected by law.

The similarities are also rooted in the people who attend. The crowds are marked by an impressive variety of ages, ethnic backgrounds, and religious and political affiliations. Yet all are united in their commitment to defend the unborn. Likewise, the crowds on both coasts are marked by that remarkable combination of sadness and joy. We are rightly distressed and grieve the ongoing loss of life by abortion; but we are filled with the joy our faith brings us that death has been conquered in Jesus Christ.

Both the March and the Walk allow pro-life groups to have exhibit booths in order to serve the participants by having a wide range of educational materials available. At both events, there are also many auxiliary events, masses, conferences and prayer services organized by other pro-life groups. Priests for Life is privileged, at both events, to organize the Gathering of the Silent No More Awareness Campaign (a joint project of Priests for Life and Anglicans for Life), at which those who have had abortions share their testimonies of pain and healing.

There are, at the same time, specific distinctions between the two events. The March for Life, because it is in DC, is more policy-focused, with a larger number of elected officials speaking at the rally, and many marchers visiting the offices of their Congressional representatives.

The Walk for Life, on the other hand, has a stronger emphasis on the fact that abortion hurts women, and that there needs to be a cultural change. Both themes are present at both events, but it is a difference in emphasis.

The Walk for Life is marked by a greater number of counter-protestors than is the March for Life, because of the mistaken notion in the minds of abortion advocates that they own the city of San Francisco, but they don’t.

What do you think about the direction of the new administration in Washington DC on Life issues?

I am privileged to serve on two advisory commissions for the President, one that handles Catholic issues, and the other which handles pro-life issues. From the beginning, I was told that Donald Trump, if he were elected, would “do everything that previous pro-life presidents have done, and more.” That has proven true.

The way he speaks about abortion, describes the procedure, and challenges the extremism of the other side is exactly what is needed. Because he is a fighter who speaks his mind directly, he cuts through the evasion and vagueness that so characterizes the way so many deal with the abortion issue.

Regarding policy, the President and his team have used both legislation, executive orders, and administrative decisions (even in regard to the language used in policy documents) to advance the cause of the unborn, both domestically and internationally. The direction of the Trump Administration on pro-life is exactly what we need it to be. And yet, even if he had done nothing more, Donald Trump did the greatest service for the pro-life by keeping Hillary Clinton out of the White House!

What do you think about the new generation of pro-lifers, i.e. Lila Rose, David Daleiden, Students for Life?

We are blessed with various new pro-life organizations and leaders who are able to apply new technologies and tactics to the same vision and mission that the movement has developed over the years. I have had the privilege of mentoring and advising many of these younger leaders and assisting them and their activities to get started and/or integrated into the movement. One of the key things the movement needs to do as it attracts new activists and leaders is to provide them an understanding of the history of the movement. We need to know the accomplishments and mistakes of the past in order to build the future.

Father Frank, what thoughts would you like to leave us with?

Whether Walking for Life in San Francisco, Marching for Life in DC, or taking part in smaller, similar events in towns, cities and villages everywhere in between, pro-life people understand that these activities have an effect both externally and internally. Externally, these events show the world that advocates of the unborn are not going away and will not be silent until abortion ends. We have seen, for instance, legislators who have changed their minds about abortion because of seeing the Silent No More women march with their signs, “I regret my abortion.”

These events also have an impact “internally,” that is, on the pro-life participants themselves. We’re encouraged to know we are not alone; we have the opportunity to network and build relationships with other activists; and by expressing our convictions in a public way, those convictions are strengthened in our own minds and hearts, and we are ready to do even more pro-life activity throughout the year.