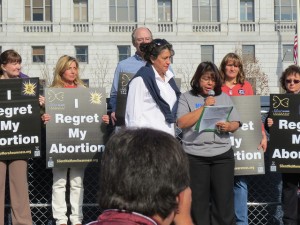 Women at the Silent No More Awareness rally. Courtesy LifeSiteNews.

Envision this: the editor at a major newspaper’s assignment desk sheds a bitter tear when she reads a news release about abortion opponents planning a rally.

This story will never get in my paper, she thinks. My own abortion was too painful, and these rally people are just prudes who never could begin to understand what I went through. Fat chance they get any publicity through me!

Could old hurts like these be one reason that dominant, secular daily media often aren’t simply indifferent but downright hostile to what would seem a positive story – thousands of people rallying to defend and offer assistance to troubled mothers and their preborn babies?

If the woman at the assignment desk hit the streets to watch the pro-life rally, she might well see some people up on the speaker’s platform pretty much like herself – even down to the fact of having had abortions.

At the West Coast’s largest annual pro-life rally on Jan. 25, held in downtown San Francisco, two of the four major speakers were women who told of having been pregnant outside marriage a total of three times, one of which ended in abortion.

Just before the rally speeches began, another woman on the platform, who had an abortion at age 16, received an award for her subsequent record of pro-life heroism.

Other women carried signs showing their membership in the “Silent No More Awareness Campaign,” a pro-life healing program established for women who regret their abortions.

Of the rally’s other two main speakers, one majored in chemical biology at the University of California-Berkeley and professes no religion; the other is a veteran black Baptist pastor, whose background includes work with juvenile detainees.

So much for the stereotype of monks and nuns orchestrating the opposition to permissive abortion.