This is a sad story, but it has a happy ending. This baby surely has an intercessor now in heaven! From Human Life International, via LifeSiteNews: 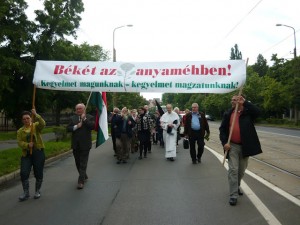 June , 2013 Pro-Life March in Debrecen, Hungary. The banner reads: “Peace in the womb! Amnesty
for us – amnesty for our children before birth!”

In a very rare event earlier this year, a pregnant women in Hungary who was declared “brain dead” was kept alive for three months on life support by doctors until her baby could be safely born.

The 31-year-old expectant mother suffered a stroke and was transported by a helicopter to the Neurological Clinic of Debrecen in Eastern Hungary. While the surgery was initially considered a success, sadly, she was declared brain dead two days later. An ultrasound showed that her 15-week-old preborn child was alive and very active.

‘In the first two days we fought to save the mother’s life and it was proven … that circulation and functions stopped,’ said Dr. Béla Fülesdi, president of the University of Debrecen Medical and Health Science Centre. ‘On the second day when [other] examinations were carried out, we found the baby was alive and kicking well in its mother’s body.’

Dr. Tamás Szilveszter Kovács, one of the physicians who cared for the mother and child, struggled for a time over the situation, as he was unsure whether helping a baby live when the mother died was in the best interests of the child. But after meeting with the father and grandparents he changed his mind: ‘They convinced me that the child would mean, paradoxically, a special surviving of the mother for the grieving father and the grandparents. So the child will be reared in a complete family, and we would commit a sin if we would not do everything we could for them that modern science makes possible.’
The father and maternal grandparents of the child together asked doctors to keep the mother alive in an effort to save the child until he could be delivered safely.

Every provision possible was taken to try to give the child the best chance possible at developing naturally and safely. The father and grandparents came three times a week from the countryside to the hospital to talk to the baby and caressed the belly of the mother. A music therapist was even employed to stimulate the baby’s healthy development….

The baby was discharged from the hospital last month but doctors wanted to wait to make the announcement about the delivery until they were sure the baby would survive.

He (the sex of the child is not known) is now developing well at home and doctors say he does not show any illnesses related to premature births although he will be continuously monitored.”