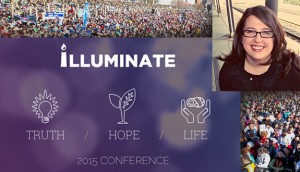 Today’s Catholic World Report had an interview with Kristan Hawkins, the dynamic President of Students for Life of America. Once again, many SFLA members will attend the Walk for Life West Coast, and, on January 25, they will have their second annual west coast conference at St. Mary’s Cathedral. Here’s the into to the interview (and you can read it in full over at CWR):

“I can’t wait to get to San Francisco!”

On May 10, 2012, Nancy Keenan, the outgoing president of NARAL Pro-Choice America, spoke with the Washington Post. The Post reported: “In recent years, Keenan has worried about an ‘intensity gap’ on abortion rights among millennials, which the group considers to be the generation of Americans born between 1980 and 1991. While most young, antiabortion voters see abortion as a crucial political issue, NARAL’s own internal research does not find similar passion among abortion-rights supporters.”

One of the groups most responsible for the “intensity gap” among the young is Students for Life of America. For 27 years, the group has hosted a conference in conjunction with Washington, DC’s annual March for Life, held on the anniversary of the Supreme Court’s Roe v. Wade decision. This year, for the second year running, Students for Life will host the SFLA’s West Coast Annual Conference in San Francisco. The conference will take place on Sunday, January 25, the day after the Walk for Life West Coast, at St. Mary’s Cathedral in San Francisco. The theme of the conference is “Illuminate: Truth, Hope, & Life.” The day-long event features prominent pro-life speakers, including David Bereit and Shawn Carney of 40 Days for Life; former Planned Parenthood clinic director, author, and activist Abby Johnson; Father Frank Pavone of Priests for Life; Wynette Sills of Californians for Life; Katie Short of Life Legal Defense Fund; Kristina Garza of Survivors of the Abortion Holocaust; Casey Tesauro, Tina Whittington, Kristina Hernandez, and Kristan Hawkins of Students for Life, and others….”