One of the best things about the Walk for Life West Coast, and one that has heartened organizers tremendously, is the fertile ground it has provided. As tens of thousands of pro-lifers and Catholics have poured into San Francisco, we are delighted at the many associated events that have grown around the Walk.

This year, at San Francisco’s St. Dominic’s Church, there will be a remarkable confluence of events. St. Dom’s is of course a wonderful Walk For Life parish—every year they host the Sisters of Life-led prayer vigil on the night before the Walk, and the Dominicans– priests, brothers, and novices–are always out in full force for the Walk. So not only will we be Walking together in defense of the littlest among us, but this year also marks the 800th Anniversary of the Dominican order. And not only that, on January 21, St. Dom’s will close the Jubilee “Holy Doors.” 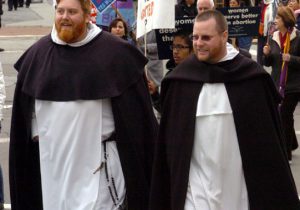 As Fr. Michael Hurley, O.P., pastor of St. Dom’s, explained the Holy Doors in the February 17, 2016 parish bulletin “…Pope Francis has given us permission here at St. Dominic’s to open a Jubilee Holy Door. Those who pass through them during this 800th anniversary (which concludes January 21st, 2017) have the opportunity to receive the outpouring of God’s powerful mercy.

For hundreds of years, the Church has made use of Holy Doors as the symbol of conversion and transformation by God’s grace. Pilgrims and penitents pass through it as a gesture of leaving the past behind and crossing the threshold from sin to grace, from slavery to freedom, and from darkness to light.”

What a great message and opportunity! We asked Fr. Anselm Ramelow, O.P. the Chair of the Department of Philosophy at the Dominican School of Philosophy and Theology in Berkeley, about the confluence of events. He wrote back “…having the Vigil at St. Dominic’s is certainly an important providential coincidence, because confessions will be heard there (and there are generally many confessions being heard at St. Dominic’s, not just, but also for the indulgences attached to the Holy Door). Needless to say, if abortion hurts women, this hurt is on multiple levels: physical, and emotional, but also spiritual: sin ruptures our relationship with God, and it takes God’s Mercy to mend this. This is exactly what the Holy Doors are offering: an open door to God, by way of the forgiveness that comes with the sacrament and the indulgence. 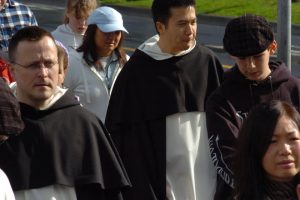 All of this must be made known: and hence the need for preaching. The Dominicans have been preaching this message for 800 years. The idea of the Dominican apostolate was to have the friars imitate the apostles, going out two by two. And then one could preach, while the other one was hearing confessions: the preached word opens the door to the soul, the sacramental word of forgiveness opens up the door to God. One of St. Dominic’s expressions of pain was: ‘oh God, what will become of sinners?’ And the Dominican Order was his response.”

God bless the sons and daughters of St. Dominic who have given, and continue to give, so much to the people of God!

If at all possible, make sure you pass through the Holy Doors of Mercy and attend the January 20 Prayer Vigil for Life at St. Dominic’s. It begins at 5:00 PM. St. Dominic’s is located at 2390 Bush Street in San Francisco.