The students from Gonzaga were not the only pro-lifers from the great state of Washington to visit the Walk for Life West Coast! This week’s Northwest Catholic, the newspaper of the Archdiocese of Seattle, has an article about parishioners from the beautiful Olympic Peninsula who attended: 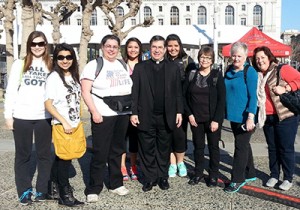 “Parishioners from Queen of Angels Parish in Port Angeles and St. Joseph Parish in Sequim joined tens of thousands of pro-life supporters at the 10th annual Walk for Life West Coast in San Francisco. (left: parishioners with Fr. Frank Pavone)

The 17 parishioners raised money to help pay for their Jan. 23-26 trip to the largest pro-life gathering on the West Coast. Queen of Angels parishioners attended the walk four years ago and were excited to be joined by St. Joseph this year, said Patty Haas, chair of the Queen of Angels Respect Life Committee, who organized the trip.

For Haas, one of the highlights was seeing how the experience affected the four teenage girls and the 27-year-old woman who were part of the group. ‘It was a lot to take in, but it enlightened them to really what’s involved when someone gets an abortion,’ Haas said.

Also among the group was Queen of Angels parishioner Kathy Gonzales, who spoke at a Silent No More gathering during the walk. Silent No More is a Christian support and advocacy group for those who have experienced or been involved in an abortion….”