Two of the annual occurrences every January are the enormous pro-life events around the country and the mass media’s recurring failure to report on them accurately or at all. This year the Walk for Light West Coast is poised to use social media to “bring light to those in darkness.” 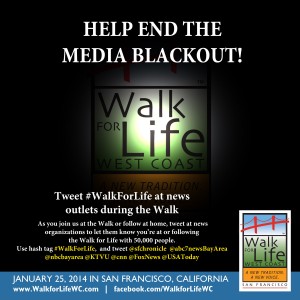 On January 22, the Facebook page of the Walk for Life West Coast announced: “Since the media is consistently ignoring us, we are going to make it hard for them to do so this year. Whether you are at the Walk or following at home, everyone take out their cell phones and tweet that they are at or following the Walk for Life with 50,000 people. In the tweet, beside including our own hash tag #WalkForLife, you will include @CNN @FoxNews @ USAToday, etc. We will have thousands of people showing these media outlets that they can’t ignore us! So get ready by downloading Twitter to your phones and learn how to send those tweets! It will be great fun.”

The issue of media negligence in regard to the Walk for Life West Coast has been well-documented. On January 20, Dexter Duggan wrote in the Arizona Daily Independent:  “Some drivers were shocked when iconically liberal San Francisco’s Market Street thoroughfare was closed for hours last year on Jan. 26. The blockage wasn’t due to a sudden water-main break but an entirely foreseeable scheduled rally, with tens of thousands of marchers… ‘Every year the Walk for Life West Coast is here,’ said Eva Muntean, one of the founders of the event that turns 10 this year. ‘We are one of the largest annual events in San Francisco. And every year we hear the same thing – ‘I’m shocked,’ ‘I ran into this absolutely enormous anti-abortion march,’ ‘I never heard of this!’ — those are actual quotes. They don’t know and they are shocked because the media is not doing its job.’”

A man at an online message board said he hadn’t known anything about the march and was stuck in traffic for two hours, Muntean said, asking, ‘Well, why didn’t he know?’ Dolores Meehan, the walk’s other co-founder, added, ‘You can avoid the truth, but you can’t avoid the traffic!’”

Duggan’s article continued  “In 2013, the liberal San Francisco Chronicle put its coverage of the Walk for Life West Coast back on Page C-12, behind two pages of weather maps and four pages of obituaries. Under the headline ‘40 years later, both sides on abortion remain at odds,’ the Chronicle portrayed the event as both sides of the issue coming out to demonstrate.

Although the slant was to imply some kind of parity, only a few hundred champions of abortion had gathered on Market Street to taunt the marchers.

In 2012, when an estimated 40,000 to 50,000 pro-lifers demonstrated right down the city’s main drag, the San Francisco Chronicle printed no story at all but ran a modest two-column photo on Page C-3 with a caption saying ‘thousands’ of abortion foes took part.

A few days before the 2012 event, Chronicle columnist C. W. Nevius telegraphed what his paper would do about covering, or not cove

ring, the pro-lifers. He wrote: ‘The best approach, of course, would be to let them have their moment, ignore them, and then go back to real life in San Francisco.’”

The Chronicle was able to publish seven stories in the run-up to last year’s “One Billion Rising” demonstration in San Francisco’s Civic Center, and three follow-ups.  That event drew an estimated 2,000 people. In other words, the Walk for Life West Coast outnumbered that event by 25 to one, yet received one seventh the coverage, and no pre-event coverage.

Walk co-chair Eva Muntean said “Certainly we are bothered by the biased lack of coverage of our event, and justifiably so. When one compares the lack of coverage of the Walk with the coverage given to far smaller events, the bias is obvious and overwhelming. But we see the twitter campaign as a service to the citizens of San Francisco as much as anything else. By their refusal to cover the Walk and inform the citizens of the tens of thousands of people who will fill downtown San Francisco on January 25 the mainstream media is failing their obligation. Whether you agree with us or not, everyone should be concerned when the media’s unwillingness to fulfill its obligation ends up shortchanging all the people of the Bay Area.”